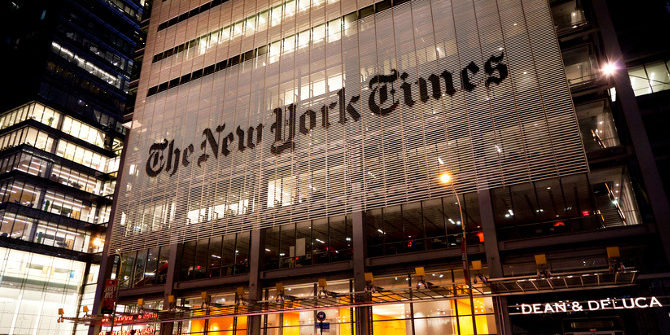 As regular readers already know — and as millions of Americans have been discovering — the Left lied to the country about the impact of the GOP’s tax reform bill, which every Democrat in Congress voted against.  Support for the law has soared by 26 net percentage points since its December nadir, according to New York Times polling, as stubborn realities eclipse opponents’ hyperbolic and disproven claims.  More than four million workers have received tax reform bonuses, and millions more have experienced enhanced benefits and rising wages due to the law’s implementation.  Consumers in 41 states have seen their utility bills slashed for the same reason.  Last, but hardly least, upwards of 90 percent of all taxpayers have received a tax cut (and an effective pay boost), across all five income groups.  This was the consensus of nonpartisan experts, including left-leaning organizations.

But last week, the Times ran an analysis on a hypothetical couple, seeking to demonstrate how some Americans would be worse off under the plan.  It’s worth acknowledging that it’s true that a small sliver of the population will see an increase in their tax burden — the hugely disproportionate number of whom are high-income earners who itemize their tax deductions (the vast majority of Americans take the now-doubled standard deduction) and choose to live in high-tax blue states.  After running the numbers, the Times concluded that the couple they’d conjured for their example would owe Uncle Sam a steep increase:

The paper’s particular example was an imaginary couple named Samuel and Felicity Taxpayer. The Times described their imaginary family, including two children and an elderly parent living in the household. The paper elaborated: “Both Samuel and Felicity earn income, she as an employee of a design firm and he as a self-employed engineering consultant.” And the Times sketched out the family finances, writing that “their total income for 2017 was $183,911, but after deductions, their taxable income is $88,293. In 2018, it would be $116,097.” The Times concluded that their fictional family would owe a whopping $3,896 more in taxes under the new law.

Not good, right?  Well, this week’s correction was worth waiting for, as highlighted bythe Wall Street Journal:

An earlier version of this article incorrectly described the probable effect of the new tax law on a hypothetical couple’s 2018 tax bill. The TurboTax “What-If Worksheet” that generated the projection for their 2018 taxes failed to indicate that the couple would probably be entitled to claim a sizable deduction for income earned from consulting. As a result of that deduction, the amount they would likely owe on taxes would decline by $43, not rise by $3,896.

They were only off by about four grand. The beleagured couple would actually get a tax cut, not a big increase. Oops.  But wait, there’s more, via a tax professor at the University of Chicago:

Still don’t see why Samuel & Felicity aren’t claiming nonrefundable dependent credits of $500 for their children Luke & Heidi and their parent Sydney, for additional tax savings of $1500 under the new law. https://www.nytimes.com/interactive/2018/02/23/business/how-to-fill-out-1040-form.html …

It looks like “Samuel and Felicity Taxpayer,” like nearly all Americans, are big winners under the GOP tax law.  The happy fictional couple should write a thank you note to Congressional Republicans and President Trump — perhaps in the form of a letter to the editor of the New York Times.