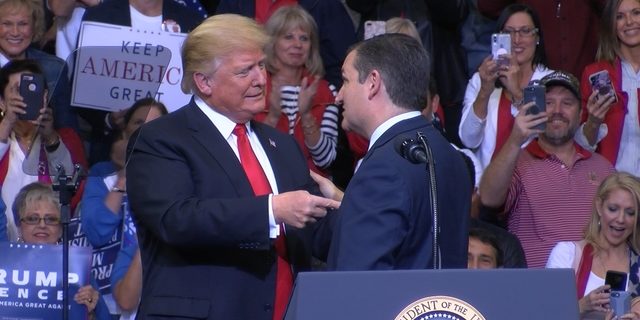 HOUSTON (Nexstar) — President Donald Trump and Sen. Ted Cruz have not always been friends. The pair seemed to put the past behind them Monday as the 45th President campaigned for the Senator at a Houston rally.

Mr. Trump described Cruz on Monday as a “really good friend of mine,” he said, before referencing their feud from the 2016 election by saying, “you know we had our little difficulties, right?”

The President’s visit to Texas comes as Cruz faces a single-digit lead over challenger Beto O’Rourke, an El Paso congressman.

For his part, Cruz made the most of his opportunity to point out the contrasts between himself and O’Rourke.

“Second Amendment,” he said to a roar from the crowd, “I’m for it, Beto’s against it.”

The other Republican leaders in the lineup boosted the estimated 16,000 in attendance by decrying the Democratic party and its leaders. “We have drawn a line in the sand, and Beto O’Rourke and the democrats will not cross it,” Lieutenant Governor Dan Patrick said. Other speakers included Gov. Greg Abbott and Sen. John Cornyn.

Mr. Trump dedicated a portion of his speech to chiding liberals, while promoting his accomplishments, including his Supreme Court appointments, the undoing of portions of the Affordable Care Act, trade relations with allies and adversaries and tightening of border security. “We are defending that border by the way, in case you haven’t noticed,” Mr. Trump said.

Supporters waited hours to see the President in person, with some spending the night camped outside Houston’s Toyota Center. “It’s a once in a lifetime opportunity for me,” Frank Cannon, of Madisonville, said. “I’ll be here and stay overnight, rough it out.” Dave Raby of nearby Katy said he wanted to show his support to let Mr. Trump know that “people have his back just like he has our back.”

Less than five miles away, elected officials representing Harris County in Washington and Austin block-walked and phone-banked to get out the vote. “We’re pretty much ignoring the elephant in the room,” Harris County Democratic Party Chair Lillie Schechter said. “Really calling on all Democrats to either volunteer or vote today to make sure that we tell the president we do not agree with his agenda.”

O’Rourke spent Monday morning in Houston himself, kicking off early voting with a list of “Get Out The Vote” rallies across the city before heading to San Marcos for an evening campaign event. “While others are gathering, we’re working,” U.S. Rep. Sheila Jackson Lee, a Houston Democrat, said.