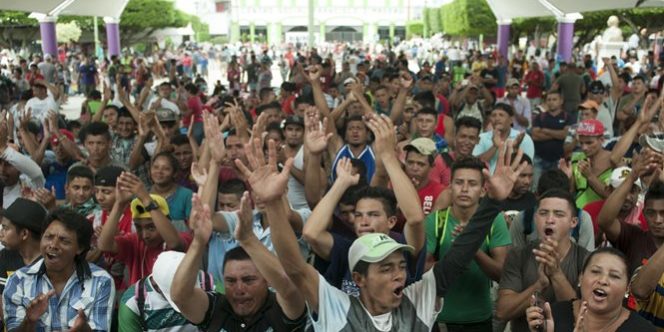 President Trump on Sunday vowed to “turn away” the migrant caravan marching through Mexico toward the United States, which has reached roughly 7,000 people.

“Full efforts are being made to stop the onslaught of illegal aliens from crossing our Souther (sic) Border. People have to apply for asylum in Mexico first, and if they fail to do that, the U.S. will turn them away,” Trump wrote on Twitter. “The courts are asking the U.S. to do things that are not doable!” He continued, placing blame on the Democrats: “The Caravans are a disgrace to the Democrat Party. Change the immigration laws NOW!”

Trump’s messages come after Mexico’s riot police delayed some of them at the border with Guatemala, but the number has swelled to 7,000 people, according to the LA Times.

Homeland Security Secretary Kirstjen Nielsen said earlier Sunday that DHS will “monitor” the situation.   “While we closely monitor the caravan crisis, we must remain mindful of the transnational criminal organizations and other criminals that prey on the vulnerabilities of those undertaking the irregular migration journey,” Nielsen said in a statement. “We fully support the efforts of Guatemala, Honduras and Mexico, as they seek to address this critical situation and ensure a safer and more secure region.”

Former acting ICE Director Tom Homan on Sunday praised President Trump’s threat of using military action at the border to control the caravan.  “I’m glad we’ve got a president that’s a bulldog and is gonna protect this country at all costs,” Homan said. “Thank God Donald Trump’s sitting in the White House.”