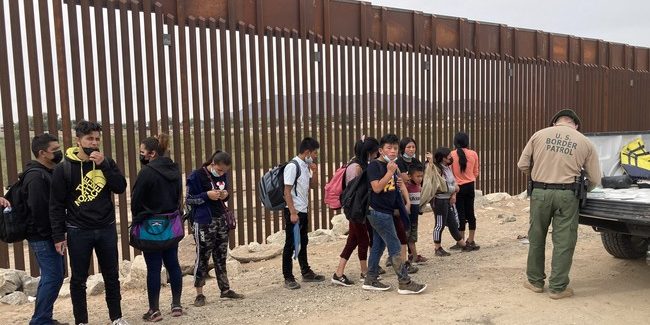 This week the Biden administration has relaunched a Trump-era immigration control policy known as “Remain in Mexico,” wherein ostensible asylum seekers must stay on Mexican soil while their claims are vetted and processed by the United States – decreasing our crushing administrative burden, and lowering false claimants’ chances of being released into the country’s interior. The White House says its hand was forced by an adverse federal court ruling, promising angry open borders allies that they’re fighting to once again abandon the successful policy. Press Secretary Jen Psaki says that the administration’s move merely reflects a commitment to the rule of law, which requires respecting judicial decisions.
Count me as skeptical. I suspect the White House is privately relieved to have an excuse to reinstate a program that will mitigate the border disaster that has become a political liability, especially with a scapegoat to blame. This may strike you as downright cynical, but I still recall when President Biden flagrantly chose to ignore a Supreme Court ruling on his unilateral eviction moratorium decree, explicitly stating that he’d exert his will and let the clock run on his preferred outcome for as long as possible. This was a temporary end-run around the third branch, which Biden’s team has not attempted in this case. Regardless, as “Remain in Mexico” locks back into place, the strains of the border crisis continue apace. We recently highlighted a dispatch from the Southern border illustrating why the Biden/Harris/Mayorkas “root causes” talking point is so quixotic and unserious: In one sector alone in October, US officials encountered illegal immigrants from 50 different countries. The hits keep coming, in Texas:

Fox’s Bill Melugin reports above that since October 1, there have been nearly 10,000 known got-aways (and, of course, an unknown number of undetected got-aways) in one border sector alone. More than 400,000 identified “got-away” illegal immigrants are known to have entered the United States last fiscal year, almost all on the Biden administration’s watch. And we keep getting unpleasant reminders that this crisis isn’t just about families and children trying to escape poverty or persecution in other countries, or able-bodied males hoping to find physical labor in order to send remittances back home. There is a far more sinister component to illegal immigration, too, with dangerous organizations and individuals seeking to access our country in violation of our national sovereignty and immigration laws:

As we’ve noted before, many illegal immigrants want to get apprehended, believing (rightly, far too often, especially under this president) that they’ll be released into the US, with decreasing risk of deportation. Others desperately want to evade American officials and slip into the country undetected. It stands to reason that the more dangerous population of illegal immigrants would disproportionately fall into the latter category – which is why smugglers, human traffickers, and cartels are known to intentionally and strategically overwhelm US authorities in certain areas, in order to divert attention and enforcement resources away from more nefarious activity. I’ll leave you with good news for the illegal migrants who will once again be required to wait in Mexico as their cases are processed. Per the Mexican Supreme Court, there is apparently now a fundamental human right to lie about your age, because self-imagined “age identity” is more important than factual information and objective reality. Mexico may now need to build a wall to keep out Americans wishing to, er, age identify differently (though I’m not sure if this newly-declared “right” applies to non-Mexican citizens). Beyond parody: