Reports: Yes, Trump Has A Plan To Kill DACA–And If It Works, The Program Could End In Weeks 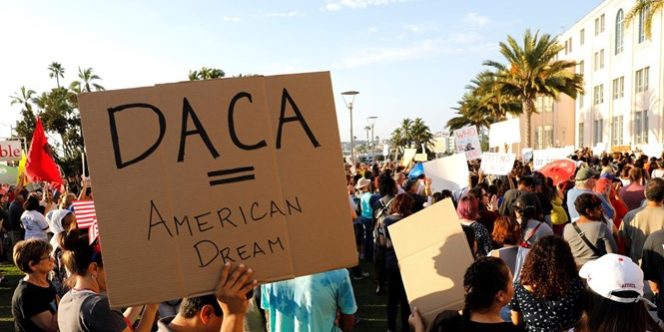 The Deferred Action for Childhood Arrivals program could come to an end if the Trump administration is successful in what appears to be a secondary protocol for how to deal with an executive order that is arguably unconstitutional. Executed under the Obama White House, DACA shields illegal aliens brought over as children who have met a certain criteria (i.e. no criminal record) from deportation. There is a separation of powers concern. It’s been on shaky legal footing for quite some time, which is why the Trump White House had a six-month enforcement delay when they announced they would be phasing out the program. Cue the Democratic outrage, but that six-month lull period was meant to give Congress time to get their act together and pass a DACA fix. They fumbled that. The Trump administration felt they couldn’t argue in defense of the law due to the constitutional issues and facing a lawsuit from various state attorneys general, they felt this was their best option—and it probably was. Yet, it’s still an issue that paralyzes the Hill. The Democrats shut down the government over it, a federal judge said they have to keep DACA a functioning program, and now we have two bills from the conservative and moderate wings that are set for a vote next week. Neither is expected to pass.

What NBC News is reporting is that the Plan B of the Trump White House is to get a ruling from a federal judge in Texas to declare the program illegal, which could set in motion DACA’s death within weeks (via NBC News):

The Trump administration is urging a federal court in Texas to declare DACA illegal, setting up a potential conflict that could allow the government to shut the program down within a matter of weeks.

In a motion filed late Friday, Justice Department lawyers told a judge in Texas that the program violates federal immigration law. Assuming, as expected, that the judge grants the request from DACA opponents and orders the government to stop enforcing DACA, the ruling would conflict with orders from two other federal courts that require continued enforcement of the program.

If faced with competing court orders, the Justice Department said it would then rush to the U.S. Supreme Court and tell the justices that the government would be in violation no matter what it did — keeping DACA going would violate the Texas order, while trying to shut it down would violate the other court orders.

In that event, the government would ask the Supreme Court to put a hold on all the lower court rulings. And if the justices agreed, the Trump administration would be free to shut DACA down immediately, because nothing would be in effect to prevent the government from taking that action.

The federal district judge overseeing the case, Andrew Hanen of Brownsville, Texas, will likely rule in their favor. Three years ago he blocked another Obama immigration program intended to let parents who came here illegally remain in the U.S. if they have U.S.-citizen children. Texas and the other states have argued that DACA is illegal for the same reasons that doomed that program, known as DAPA [Deferred Action for Parents of Americans].

That order was rescinded last June. There is a fine line here. I see where some in the party worry that the optics will cost us an entire voting bloc for a generation or more, but we have to enforce the law, our borders, and deport people who shouldn’t be here, namely criminal aliens and gang members like MS-13, which this administration is doing. This is one of the reasons why Trump was elected. There’s a new sheriff in town, but the political waters of immigration have to be navigated carefully. Democrats are making it a lot easier by defending MS-13 thugs as people who aren’t so bad, and Trump has the ability to make them defend the indefensible. Yet, before that popcorn-worthy feature, let’s see how this legal challenge plays out.