Schumer: Hell Yes, We’re Going to Try and Fail to Nuke the Filibuster Over ‘Voting Rights’ 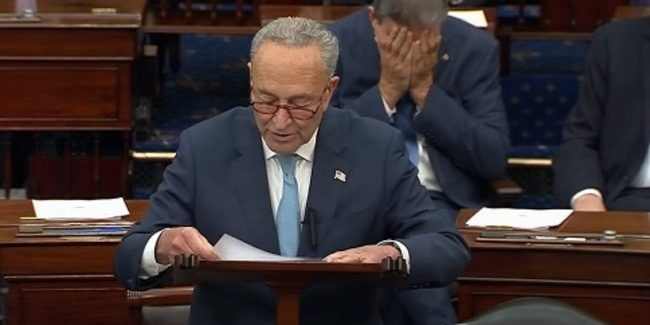 We already know how this ends.  Under pressure from left-wing activists and the Very Online Twitter base, Senate Democrats will try to pass “voting rights” legislation, based on a phony “crisis” that’s been erected as their latest pretext for their unilateral power grab, re-writing the nation’s election laws through partisan legislation.  They’ve used other excuses to promote this legislation in recent years, but they’re currently citing a nonexistent ‘voting rights’ emergency as their latest one.  They lack the votes to pass this legislation.  They also lack the votes to nuke the filibuster and change the Senate rules in order to maybe have a chance to pass their elections takeover in a 50/50 Senate.
Two Democratic Senators have flat-out refused to alter the filibuster and have reaffirmed that position in recent days.  A handful of other upper chamber Democrats have conspicuously avoided stating a firm position on the nuclear option, but the genius leadership braintrust will now force them to take a formal stand.  Even though it will achieve nothing, because everyone concedes that the vote will fail.  But it could make some of their members’ re-election campaigns more difficult, by either handing Republicans an easy talking point about going along with Schumer’s radical schemes, or by infuriating the leftist base.  After failing on Build Back Better, it would seem as though pivoting to an attainable goal would have been the smart play, but Chuck is opting for a divisive, quixotic emotional catharsis:
Mitch McConnell couldn’t agree more.  Get these filibuster votes on the record.  End certain Senate Democrats’ strategic ambiguity.  Amazingly, it’s the Democrats who are choosing to do this, knowing it will fail.  Republican operatives and other conservatives can’t quite believe what they’re seeing:

“Filling the tree,” by the way, ensures no amendments can be offered or debated on the bill, so Schumer is teeing up no amendments, a demagogic and dishonest debate, then an anticipated face plant.  Slow clap.  By the way, have journalists been hounding Schumer over his previous filibuster-related rage speeches?  You know, back when he was adamantly and passionately on the other side of this issue?  Like when he called the idea of Republicans altering another form of the filibuster “doomsday for democracy” that would bring about an era of “banana republic”-style “dictatorship”?

Republicans didn’t pull the trigger on that, incidentally, but Democrats (including Schumer) did a few years later, when they were in charge.  Schumer then demanded the legislative filibuster — a vital “guard rail” of democracy, he said — be protected by an impenetrable “firewall” during the Trump years.  And now he’s doing what he’s doing.  Maybe reporters have been swarming to challenge Senate Democrats on this flagrant, expedient hypocrisy, and I’ve somehow just missed it.  What I have seen is journalists actively lobbying for the nuclear option, on behalf of the wishes and agenda of their progressive wing of their Democratic party.  As a reminder, the Democrats’ plan to “save democracy” — which is nowhere near the top of voters’ priority list — entails effectively repealing state control, ending voter photo ID laws, enshrining the extremely fraud-vulnerable practice of “ballot harvesting,” and forcing taxpayers to fund the campaigns of politicians they oppose.

Zero Republicans in Congress support the effort, including the most Trump-hostile members.  It’s purely partisan, and its ends are similarly purely partisan — which is why Democrats are simply repackaging their previous radical plans under the auspices of a “crisis” on “voting rights.”  Place your bets now: Will any other Senate Democrats (aside from Sinema and Manchin) vote against the nuclear option?  I’m holding out hope for one or two of them, but I suspect they’ll all knuckle under, fearing their base’s ignorant and bottomless rage (see update).  After all, who could live without Kamala Harris’ “absolution“?  Who could survive zingers like this?

I’ll leave you with Cocaine Mitch warning Democrats against their proposed, short-sighted, mendaciously-marketed, destined-to-fail power grab effort, acidly ridiculing them for using a tool hundreds of times in recent years (and days!), then miraculously turning into a dark Jim Crow relic overnight:

UPDATE – As I was saying: