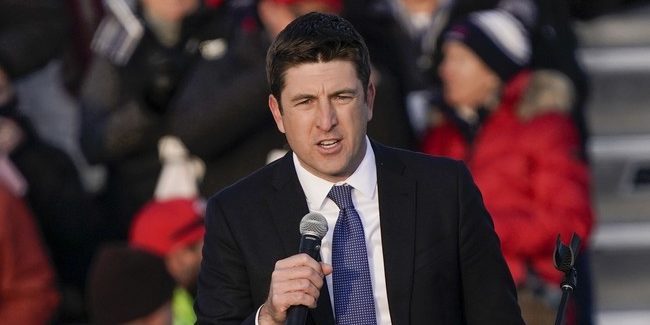 During Wednesday’s press conference, President Joe Biden shockingly responded that “I’m not going to say it’s going to be legit” when asked by a reporter about the 2022 midterm elections, as he also spoke of an attempt for Democrats to pass voting legislation that would amount to the federal takeover of elections. The president also doubled down on this point later in the press conference. “Oh, yeah, I think it easily could be — be illegitimate,” Biden subsequently said. As Biden predicted, the legislation failed late on Wednesday night, as did an attempt to nuke the filibuster.

The follow-up responses from White House and Democrats on Thursday, or, as Rep. Bryan Steil (R-WI) explained it in during a conversation with Townhall, “clean up on aisle 46,” did not help. Steil is the Subcommittee on Elections ranking member.

Steil had highlighted the hypocrisy in a statement from Wednesday night. “For over a year, Democrats have been saying anyone who questions election integrity is paramount to treason. Today, President Biden did just that by questioning the legitimacy of future elections during his press conference if the Democrats’ partisan election bill is not passed in the Senate.” Steil said.

Thursday brought us Vice President Kamala Harris’ interview on the TODAY Show with Savannah Guthrie, as Matt covered. Harris didn’t answer Guthrie’s question, but rather doubled down on promoting the legislation defeated on Wednesday. “But the specific question, if you don’t mind,” Guthrie asked of Harris. “Does [Biden] think, now that these bills haven’t been passed, the ’22 midterms won’t be legitimate, or fair, or free?”

Harris continued to evade, as she had done throughout the interview. “Let’s not conflate issues,” the vice president condescendingly said. “So what we’re looking at, and the topic of so much debate last night, was that we as America cannot afford to let this blatant erosion of our democracy, and in particular, the right of all Americans who are eligible to vote, to have access to the ballot unfettered. That is the topic of conversation.” Harris went on to insist “let’s not be distracted by the political gamesmanship.”

Then there’s Rep. Jim Clyburn (D-SC), who, as the House Majority Whip, is the third-ranking House member. Clyburn, a key Biden ally, had been asked by CNN’s Kasie Hunt on Thursday morning if he was “concerned, that without these voting rights bills, the election results won’t be legitimate.” He responded “I’m absolutely concerned about that.”

White House Press Secretary Jen Psaki, though, told a different story, with her tweeting and her responses during Thursday’s press conference.

Such responses haven’t comforted the Republican Party, though. Rep. Steil, spoke with Townhall on Thursday after these desperate efforts from the Democrats, calling it “incredibly unhelpful that Americans don’t have confidence in their elections” and offered instead that “we should be working to instill confidence in our elections,” which would be by passing election integrity legislation as the states have been doing.

When it comes to the motive behind such desperation, Steil did not mince words. “I think their motive, one is to rewrite our nation’s election laws.” When it comes to the different versions, of HR 1, HR 4, and a Manchin so-called compromise, Steil warns that Democrats “are going to continue to push forward on this agenda to weaken voter integrity provisions, and they’re doing it in a very political manner.”

As a matter of politics, Democrats are “not actually sitting down and saying ‘where are there areas where we could, you know, provide additional integrity and confidence in our elections, like voter ID, or like having ballots counted on Election Day.’ They’re actually coming forward with a political agenda that they think sells, that I think when you actually explain to the American people what’s in these bills, in detail, they actually disagree with the Democratic ruling class.”

The Democratic voting legislation proposals are a threat to state control over their elections because it would get rid of such commonsense provisions as the ones Steil mentioned above, including voter ID, which enjoys strong supermajority support from all demographics.

In July, Steil had also spoken to Townhall taking issue with Vice President Harris suggesting people in rural America would not know how to make a copy of their ID to vote.  As Rep. Steil also pointed out on Thursday, and as I covered in a conversation with Rep. Chip Roy (R-TX), Democrats require photo ID along with proof of vaccine to enter establishments in liberal cities such as Washington D.C., and New York City, but not to vote, since that is considered racist.

Steil offered to look not merely to the president’s performance at the press conference, but “what a disappointing year this has been.” The congressman offered he is “concerned about is the underlying policies in this administration are moving us in the wrong direction,” urging “it is paramount that we have a change of course immediately.”

The GOP is poised to take back control of the House in 2022. Rep. Steil pointed out, though, that “we shouldn’t  start measuring the drapes” just yet, as “the wind is at our back, but Republicans are really good at shooting themselves in the foot.” He has his eye on the prize of that the GOP needs to do, which “is put one foot in front of the other and explain to the American people what we stand for and what we’re going to do if elected.”