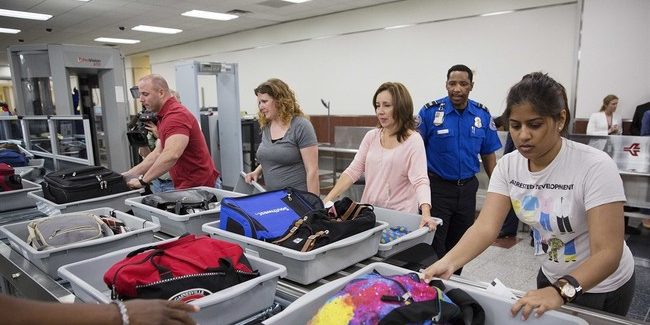 What in the fresh hell is this? As if the secret night flights which carry illegal aliens across the country aren’t bad enough, this is what the TSA is telling them that would permit them to air travel. I’m guessing many if not all don’t have a valid form of identification to pass security. There needs to be something that verifies their identity. If they can’t obtain such identification, what will work? I know, silly question since illegal aliens should be deported but the Biden Administration isn’t going to do that. How about something like an arrest warrant? Would that work? Yes, that will do (via Daily Mail):

The Transportation Security Administration revealed that unlawful immigrants who are unable to obtain proper identification are being allowed to pass through security using an arrest warrant to prove their identity.

Rep. Lance Gooden, R-Texas, had sent a letter to TSA after a whistleblower claimed the agency was allowing ‘unknown migrants’ to board commercial airlines in the U.S.

TSA Administrator David Pekoske responded explaining that certain Department of Homeland Security (DHS) documents may be considered acceptable alternate forms of identification, including a ‘Warrant for Arrest of Alien’ and a ‘Warrant of Removal/Deportation.’

Other acceptable forms include an Order of Release on Recognizance, an Order of Supervision, a Notice to Appear, and Arrival and Departure form or an Alien Booking Record, according to a letter obtained by DailyMail.com. The Daily Caller first reported the news.

The policy applies to non-U.S./Canadian citizens who do not have government-issued ID or passports.

DHS said that an average of 159 passengers fly throughout the U.S. using these DHS-issued documents per day.

‘TSA’s response confirms the Biden Administration is knowingly putting our national security at risk,’ Gooden told DailyMail.com. ‘Unknown and unvetted immigrants shouldn’t even be in the country, much less flying without proper identification.’

If this doesn’t expose how broken our immigration system has become under Democrats, I don’t know what will suffice. Now, part of it is that Democrats are truly that stupid to even consider this. The long game answer is one you already know. They want to pack this country chock full of illegals. It increases the population, which increases the clout of Democrats on the Hill. These illegals form enclaves in blue states. Democrats find similar ethnic representation for office. The boost in population leads to new districts and congressional maps. It’s how Democrats have been able to increase power for ten-plus years. It’s not new—it’s just that their schemes of keeping people here are becoming more comical. Our southern border is a mess, but this is beyond broken borders. When arrest warrants are accepted as verified forms of identification for air travel anywhere in the US—the system is perverted. For a second, you’d think you’re reading the Babylon Bee. You cannot make this up, but here we are, right?

God bless that whistleblower, by the way.