Shut Down: Senate GOP Muzzles Elizabeth Warren After She Made Disparaging Remarks About Jeff Sessions 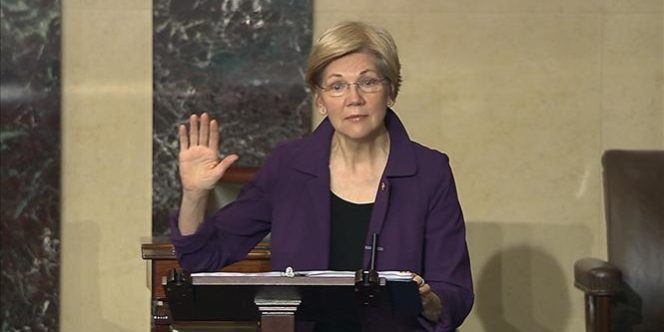 With the final confirmation vote of Sen. Jeff Sessions (R-AL) to become our next attorney general imminent, Sen. Elizabeth Warren took to the floor to deliver her remarks. It was another tirade of course. MSNBC’s Mika Brzezinski, who says she’s a fan of her, says that the angry liberal act is getting tiresome.  “I’ve got to tell ya — I love her, but I’m getting tired of this act. I mean, she’s just got to stop,” said Brzezinski on the November 29, 2016 broadcast of Morning Joe.

The vote of Sessions attorney general nomination is coming later this evening. Warren took to the floor last night, but wasn’t able to finish her speech, which included a letter from Coretta Scott King, because Senate Majority Leader Mitch McConnell felt the Massachusetts liberal had violated Rule 19 of the Senate. A rule that states how senators are not permitted to “directly or indirectly, by any form of words impute to another Senator or to other Senators any conduct or motive unworthy or unbecoming a Senator.”

In her speech, Warren read past statements about Sessions’ failed 1986 federal judgeship nomination that was derailed over allegations of racist remarks while he served as a U.S. Attorney in Alabama. At the time, Sessions, who liberals view as the spawn of Satan, worked to desegregate schools, took on his state’s Ku Klux Klan chapter, and even, prosecuted a Klan leader for the murder of a black teenager, Michael McDonald. He pushed for the death penalty as well. It paved way for a $7 million civil judgment against the KKK in a wrongful death lawsuit filed by McDonald’s family, breaking the white supremacist group’s Alabama chapter. The Weekly Standard’s Mark Hemingway wrote about this when President Trump formally nominated Sessions. Yet, that fell on deaf ears with Warren, as did the late Sen. Arlen Specter’s (D-PA) regret about voting to reject Sessions’ 1986 nomination (via Politico c.2009):

Sen. Arlen Specter said Tuesday he regrets his vote against Sen. Jeff Sessions (R-Ala.) two decades ago that helped kill his nomination to the federal bench.[…]

Now Sessions and Specter both serve on the Judiciary Committee and have never spoken about the vote that prevented Sessions from winning a lifetime seat in the federal judiciary.

Following his first lunch meeting with Senate Democrats on Tuesday, Specter told reporters that out of the 10,000 votes he has cast, he can now recall one that he regrets.

“I don’t expect everybody to agree with all my votes, and I don’t agree with all my votes, either, at this point … and I was asked the other day what vote I regretted, and I couldn’t’ think of one that I wanted to publicly state, but I’m prepared to do that now in response to your question,” Specter said. “My vote against candidate Sessions for the federal court was a mistake.”

Asked why, Specter said, “because I have since found that Sen. Sessions is egalitarian.”

Warren decided to quote the late Sen. Ted Kennedy’s (D-MA) 1986 statement of opposition to Sessions, “He is, I believe, a disgrace to the Justice Department and he should withdraw his nomination and resign his position.” That remark earned Warren her first warning by presiding officer Sen. Steve Daines (R-MT). When Warren accused Sessions of using his power as U.S. Attorney to disenfranchise blacks from voting, McConnell shut her down. And in a party line vote, effectively stopped her from speaking further on the Senate floor for the remaining hours (30 in total) that are left concerning the Sessions nomination (via WaPo) [emphasis mine]:

In setting up the votes to rebuke Warren, McConnell specifically cited portions of a letter that King, the widow of slain civil rights leader Martin Luther King Jr., wrote to the Senate Judiciary Committee in opposition to Sessions’s 1986 nomination to be a federal judge.

“Mr. Sessions has used the awesome power of his office to chill the free exercise of the vote by black citizens,” King wrote, referencing controversial prosecutions at the time that Sessions served as the U.S. attorney for Alabama. Earlier, Warren read from the 1986 statement of Kennedy, a senior member of the Judiciary Committee who led the opposition then against Sessions, including the Massachusetts Democrat’s concluding line: “He is, I believe, a disgrace to the Justice Department and he should withdraw his nomination and resign his position.”

The Senate voted, 49 to 43, strictly on party lines, to uphold the ruling that Warren violated Rule 19 of the Senate that says senators are not allowed to “directly or indirectly, by any form of words impute to another Senator or to other Senators any conduct or motive unworthy or unbecoming a Senator.” Pursuant to that rule, Warren was ordered to sit down and forbidden from speaking during the remainder of the debate on the nomination of Sessions.

“I am surprised that the words of Coretta Scott King are not suitable for debate in the United States Senate,” Warren said after McConnell’s motion.

Sen. Steve Daines (R-Mont.), a freshman who was presiding over the Senate at the time, issued a warning to Warren at that point, singling out Kennedy’s “disgrace” comment, and 25 minutes later McConnell came to the floor and set in motion the battle, citing the comments in the King letter as crossing the line.

Warren’s speech ended with a simple admonition from Daines: “The senator will take her seat.”