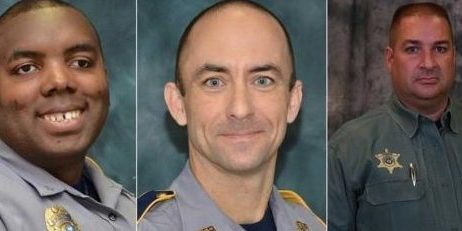 A gunman and three officers he killed in Baton Rouge Sunday morning have been identified. In all, three offers were killed and three others injured in the latest violence between police and civilians.According to ABC News, Gavin Long, 29, of Kansas City, Missouri, opened fire on the officers, killing Baton Rouge PD Officers Montrell Jackson, 32, and Matthew Gerald, 41, East Baton Rouge Sheriff’s Office Deputy Brad Garafola.  Long, a former Marine who started duty in August 2005 and was discharged five years later in 2010, was shot and killed at the scene.

Law enforcement sources told ABC News that federal authorities are currently looking into what ties — if any — Long may have with the Moorish Science Temple of America. This is an anti-government movement and group that has long been under FBI scrutiny.Long had his cell phone on him at the time he was killed. Investigators have the phone and are scrubbing it for new leads, including of course any potential associates. At the same time, authorities are trying to nail down how and when he got to Baton Rouge from Missouri, how many other weapons he may have recently obtained and where he got them, and sources told ABC News authorities are “ripping through his social media.”Law enforcement sources tell ABC News that authorities are looking into videos of the alleged Baton Rouge shooter that have been posted online.