Who’s not showing up at RNC. 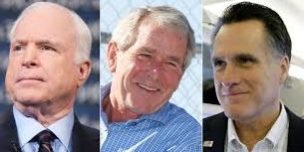 This year’s Republican National Convention, part of the story is all about who won’t be there.

Former President George H. W. Bush won’t be in attendance. Nor will his son, Bush 43.

The governor of the host state of Ohio, and former rival, John Kasich, isn’t coming.

One of the no-shows is Sen. Pat Toomey (R-Pa.) who’s in a tough re-election fight against Democrat Katie McGinty.

Pennsylvania Congressmen from the area, including Ryan Costello, Mike Fitzpatrick and Joseph Pitts, are not coming.

Then there are representatives Charlie Dent of the Lehigh Valley and Pat Meehan in Delaware County – neither are going.

So is it all about Trump?

“I’m not going to go out there for a coronation. I feel very strongly the incendiary comments that have been made over these many months, combined with a lack of policy specificity, have caused concern for me.

“I’m never going to be supporting Hillary Clinton under any circumstances, but at the same time, I just haven’t been able to cross the Rubicon in terms of supporting the presumptive nominee,” said Rep. Charles Dent (R-Pa.).

“Well I’m not currently ready to do that,” said Rep. Pat Meehan (R-Pa.) when asked if he endorsed Donald Trump for President of the United States.

“I am hoping to be able to hear more. I’m not going to be supporting Hillary Clinton. My guess is he’s got the skill set. Whether he takes that and turns it into a temperament I want to see. I’m concerned with some of the rhetoric now. I’m not particularly pleased with it to this point,” added Meehan.

The convention has other problems because of corporate donor no-shows.

Motorola, JP Morgan Chase, Wells Fargo and Apple are part of the group that donated large sums to the GOP convention four years ago.

This year, they and many others have scaled back or are keeping their cash in their pockets.

And right now, reports say the RNC is $6 million short.