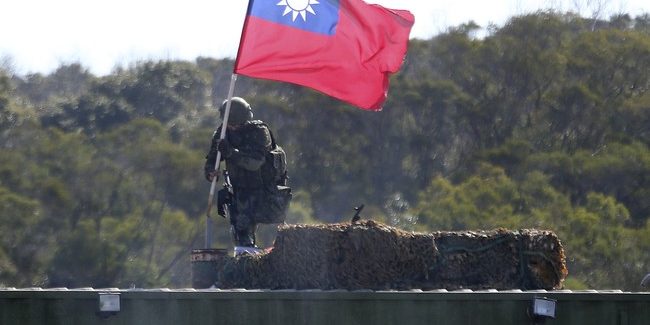 A record number of Chinese warplanes buzzed Taiwan on Monday as the communist regime continues to escalate its aggressive posture toward the self-governed island nation.

Taiwan’s Ministry of National Defense tweeted that, as part of its tracking of Chinese aircraft incursions of its Air Defense Identification Zone, it logged a one-day high for the number of military planes entering its ADIZ.

In recent days, China has sent nearly 150 planes, including some capable of carrying nuclear weapons, toward Taiwan even as American and allied aircraft carriers are present in the region.

The escalation in shows of force come as the CCP’s propaganda media heralds the sorties as “a clear and unmistakable declaration of China’s sovereignty over the island” and claims Taiwan’s government is “an evil force the mainland must crush.”

Taiwan’s foreign minister, Joseph Wu, said in an interview on Australian television that “the defense of Taiwan is in our own hands, and we are absolutely committed to that,” adding “if China is going to launch a war against Taiwan, we will fight to the end and that is our commitment.”

Working to shore up allies in the face of Chinese aggression, the foreign minister also said Taiwan “would like to engage in security or intelligence exchanges with other like-minded partners, Australia included, so that Taiwan is better prepared to deal with the war situation.”

The Biden Administration warned on Sunday that it is “very concerned” by China’s “provocative military activity near Taiwan” via a statement from State Department spokesman Ned Price. China’s action “is destabilizing, risks miscalculation, and undermines regional peace and stability,” the statement continues before calling on Beijing “to cease its military, diplomatic, and economic pressure and coercion against Taiwan.” The Biden administration says that it will “continue to assist Taiwan in maintaining a sufficient self-defense capability” and says its “commitment to Taiwan is rock solid.” Clearly, the statement did not dissuade China from carrying out its largest flight operation toward Taiwan the next day. China’s boldness in the face of the Biden administration’s finger-wagging means Taiwan, as seen in its foreign minister’s interview, is looking elsewhere — to Australia — for help.