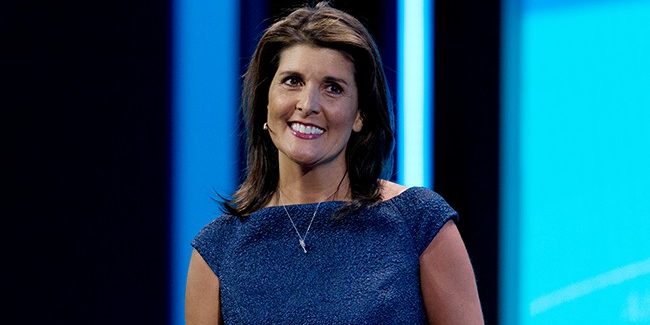 With more than a few allusions to our 40th president’s famous lines, former South Carolina Governor and Ambassador Nikki Haley offered her take on America’s standing in the world at the Reagan Library in Simi Valley, California on Tuesday night, painting a picture of an America that’s down at home and abroad but certainly not out if conservatives continue to stand up for their values.

The America Ronald Reagan took over from President Carter, Haley asserted, is not entirely dissimilar from the America conservatives now find themselves in under President Biden: growing inflation, runaway federal spending and debt, rampant crime in our cities, radical leftists running our universities, radical Islamists holding Americans hostage, and an evil Communist empire aggressively spreading its influence in the world are among Haley’s concerns. Drawing on her experience as the United States Ambassador to the United Nations under President Trump, Haley explained that rather than the one “evil empire” Reagan faced in the U.S.S.R., we now face a number of evil actors: “Islamic terrorists, Iran, Russia, Communist China. They all want to harm America,” Haley said. “They all want to drive freedom from the earth. And they all increasingly have the capacity and the will to attempt to do it.”

“Our enemies are not just people with a different view about how best to govern,” Haley said firmly, not mincing words. “They are barbaric.”

The increased will of these barbarians to harm America at home and deal blows to freedom abroad is the fault of President Biden and his disastrous and deadly withdrawal from Afghanistan. “The fall of Saigon and the Iran hostage crisis rolled into one” gave the world its cue, explained Haley, that their time to wait was over. “The fall of Afghanistan has every one of them thinking America’s era has ended and theirs has arrived,” she said.

“Everyone saw it coming, except the president,” Haley said, “who promised it would never happen. Where I come from, that’s a fireable offense,” she quipped.

“The consequences of this failure are echoing across the world,” said Haley. “Now there are not one but two radical Islamic regimes in the world — Afghanistan and Iran,” she noted before warning “you can bet they will push their advantages, because Joe Biden has proven he will fold.”

“Joe Biden has done more to improve Russia’s economic and strategic standing than Trump ever did,” said Haley. “The worst threat of all,” she said, is Communist China. “Beijing now sees the biggest opening it’s ever had with Taiwan is directly in its crosshairs. But it’s not just Taiwan,” she cautioned. “Japan, South Korea, India, Australia — they’re all starting to wonder if they stand alone. They too are wondering if the American era is over.”

Even worse, Haley explained, America’s foes now believe “the good guys lack the will to win,” a perception that “is very dangerous for America and the free world.”

With a stark picture of America’s current standing in the world, Haley declared that the “most urgent mission of our time is to stop our national self-loathing and to regain our courage and renew our convictions.”

“Every day, more people think living in the land of the free is a curse, not a blessing. You hear it on the news. You read it on social media and in school curricula. You see it in rage and riots on our streets,” Haley said, ticking off a list of societal ailments dragging down the kind of informed patriotism for which Reagan advocated.

“The America-doubters are more powerful than ever,” Haley warned. “This problem runs deeper than being ‘woke,’ it’s bigger than critical race theory. Those things are dangerous,” she explained, “but the greater danger is that anger toward America is now the bedrock belief of the American left.” Haley points out that President Joe Biden and Vice President Kamala Harris “routinely accuse America of systemic racism.”

Democrats across the board now “see America’s flaws as more profound than its strengths,” said Haley. “They deny the massive progress we’ve made, and they punish anyone who disagrees — they are quick to praise those who attack America, and eager to attack those who praise America.”

“The only way to bring out the best in America is to believe in America,” Haley declared. “We must not be ashamed of the American story. We should tell it everywhere we go.” That story is not perfect, Haley admitted, who added “the principles at the heart of America are perfect.”

Rather than letting leftists and Democrats claim the mantle of progress, Haley called on conservatives to tell the stories of Frederick Douglass, Elizabeth Cady Stanton, abolitionists and suffragettes who proved America’s first principles do work. All we need to reawaken the patriotism and exceptional strength of America, according to Haley, is to “restore America’s moral courage” with “the confidence that our cause is just and our principles are true.”

“The sooner we lead a new awakening of patriotism, the quicker we’ll stop the decaying belief that our country is systemically racist,” she said. “The sooner we rekindle faith in our first principles, the faster we’ll make even more progress toward justice for all. Most of all, by restoring belief in the goodness of our national cause, we’ll prepare the country to beat the challenges of the 21st Century.”

“Only a confident and proud America can win the clash of civilizations,” a fight the happy conservative warrior seemed eager to begin. “Our challenges are steep, but they are not too steep to overcome, so long as we believe in America and fight for America.”