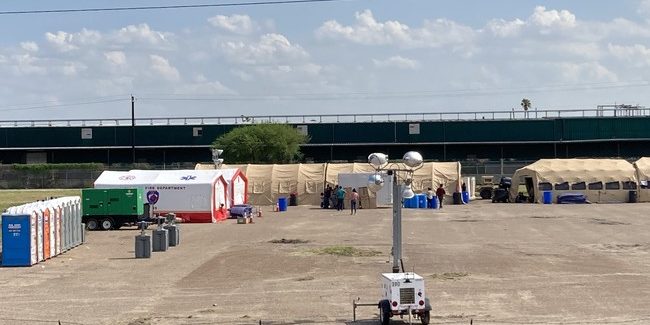 MCALLEN, Texas — The city leaders for the border town of McAllen declared a local state of disaster due to the continuing increase of illegal immigrants crossing into the United States and being released by Border Patrol within the city.

In a statement sent out on Wednesday, the city of McAllen explained the respite center run by Catholic Charities has been overwhelmed by the number of people being handed over by Border Patrol in recent weeks, which meant the immigrants were in danger of having nowhere to go. So the city was forced to create a temporary shelter to house the immigrants:

“This significant change increases the threat of COVID spread or other lawlessness within the city. At the beginning of July, the Respite Center saw an average of 750 people per day. That number, over the course of the month, escalated to over 1,100 people per day, and so far in August has surged to over 1,900 people per day. The Respite Center has capacity for only 1,236 occupants and will not allow more than its maximum occupancy at any given time. Therefore, beginning in August 2021, there has been a significant threat of leaving hundreds on the streets of McAllen with no place to turn for food, shelter, medical attention, or other humanitarian services. It was at this point that McAllen Mayor Javier Villalobos saw no option other than to declare a Local State of Disaster in McAllen so the City of McAllen could obtain necessary county and state resources to address the situation that it did not create.”

To make matters worse, according to the statement, Border Patrol released at least 7,000 people into the city who later tested positive for COVID-19, with over new 1,500 COVID cases in just the past week.

“Despite the City of McAllen and its community partners’ best efforts, the sheer number of immigrants being released into the city has become a crisis: a crisis the City of McAllen did not create and has proactively tried to avoid for seven years. Now, with the drastic, unexpected increase of immigrants arriving to McAllen, the City Commission’s first priority is to protect the health and safety of the residents they serve,” the statement added.

The immigrants released by Border Patrol are the result of the Biden administration changing who is turned away under the CDC’s Title 42 authority. While Title 42 still applies to single adults, unaccompanied minors and many family units have been exempt from Title 42. To make matters harder for Border Patrol, Mexico is refusing to accept family units being expelled under Title 42. The new shelter the city built is on the north end of town, with tents and porta-potties for the new arrivals. With the shelter only having been built on Tuesday night, there were already around 100 immigrants inside.