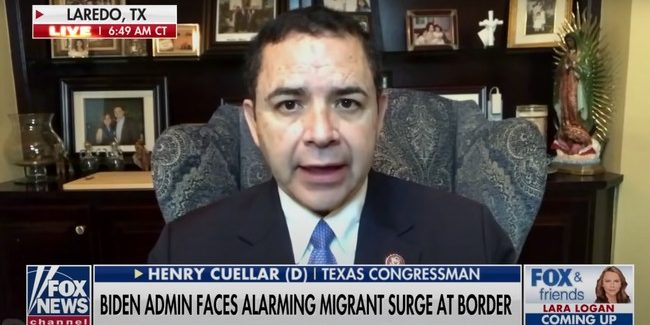 Rep. Henry Cuellar (D-TX) called out President Joe Biden during an interview with Fox News for recently claiming the ongoing crisis at the U.S.-Mexico border is now under control.

Biden pointed to how the number of unaccompanied children in overcrowded Border Patrol stations, which are not designed for long-term detainment, had decreased significantly in recent weeks. He went on to blame former President Trump’s administration for not being prepared to handle a surge in terms of beds and space. Cuellar noted Biden barely talked about the border and immigration during his address to Congress last week.

“There is a border crisis, no ifs, no buts about it. The numbers are still high. They’re doing a little better at moving the unaccompanied kids from Border Patrol, let’s say in Donna, from the Border Patrol station to those five tents that HHS has next door. So they’re doing a little better on the outflow itself but what about the inflow? That is people coming in. Those numbers are still coming in,” Cuellar said.

“I mean look at the people that they release on process control discretion, it’s about 8,500 people that they’ve released on the honor system and they’re not even part of the — have not been given a notice to appear, they’re not part of the immigration system,” he continued. “So to say that we have everything under control — you know I’m supportive of President Biden, I’m a supporter of his, but you know we’re not paying attention to the border’s communities and — and it’s — this is not under control, I can tell you that.”

Cuellar has been one of the only Democrats to be openly critical of the Biden administration’s handling of the immigration crisis, which has been spurred in part due to their open border rhetoric and policies. U.S. Customs and Border Protection has reported the largest increase in apprehensions along the U.S.-Mexico border in the short time Biden has been in office, with over 100,000 illegal immigrants caught in February and over 170,000 caught in March. April’s numbers are expected to be around the same amount.