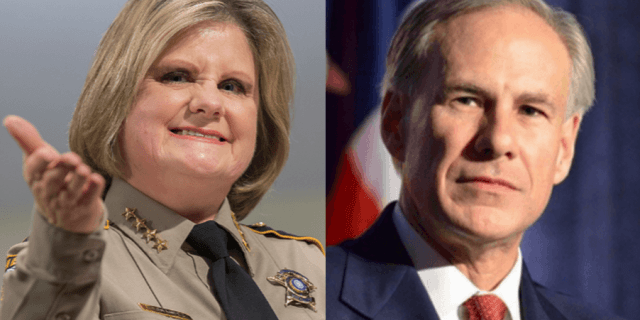 Texas Governor Greg Abbott responded to Sheriff “Sanctuary Sally” Hernandez’ promise to take a closer look at inmates subject to federal immigration detainers on Wednesday. He tweeted – “Not good enough. Must end it.”

The governor of the Lone Star State was clearly unimpressed by reports that the Travis County sheriff will reevaluate her policy. He noted, “Travis Co. Sheriff now sees how dangerous her Sanctuary policy was & will alter it.”

The Austin American-Statesman reported on Wednesday that Sheriff Hernandez will now look at other violent offenses when determining whether to grant U.S. Immigration and Customs Enforcement (ICE) detainers. She said she will look at crimes like kidnapping and child abuse in addition to murder cases, aggravated sexual assault and continuous human smuggling offenses. The Travis County sheriff had already committed to automatically complying with ICE detainers for criminal aliens who had committed these latter offenses.

Sheriff Hernandez’ dogged stance on the policy was softened by the discovery of a Travis County case involving a man accused of sexually assaulting a nine-year-old girl, reported the local newspaper. Hugo Gallardo-Gonzalez had been charged with continuous sexual abuse of a child, one of the crimes that was not originally on the sheriff’s automatic compliance list. Gallardo-Gonzalez posted bail and was supposed to be released on Monday but county employees honored the detainer request after reviewing his file. As reported by Breitbart Texas and other media outlets in mid-January, Hernandez was expected to announce that her jail would no longer honor ICE immigration detainers. In doing so, she was fulfilling a campaign promise to re-buff federal immigration laws relating to illegal aliens that had committed crimes and were subject to a detainer. The Travis County budget director issued a memo to county officials saying that Hernandez said she would “no longer be complying with a state rule that the county honor such federal requests in order to receive some grant money.” Texas Governor Greg Abbott responded quickly to her announcement. “As Sheriff your primary duty is to ensure the safety of the residents of Travis County,” Abbott wrote in a letter to Sheriff Hernandez. “However, your recent policy directive forbidding Travis County Sherriff’s Office (TCSO) employees from cooperating with U.S. Immigration and Customs Enforcement (ICE) (except in the most limited of circumstances) betrays your oath and the residents of Travis County. I strongly urge you to reverse that policy before its effective date of February 1, 2017.”

When the sheriff did not reverse her policy, Abbott was true to his word and stripped the state law enforcement grants to Travis County on February 1. The sheriff’s new sanctuary policies went into effect that day. Sheriff Hernandez responded to the grant cut by releasing 39 criminal aliens from her jail on February 1. In all, the Hernandez’s adherence to the policy could cost Travis County an estimated $1.8 million. Anti-sanctuary city legislation is one of Texas Governor Abbott’s four stated legislative emergency items. The governor set it as a priority during his State of the State Address before a joint session of the Texas legislature in January, as reported by Breitbart Texas.