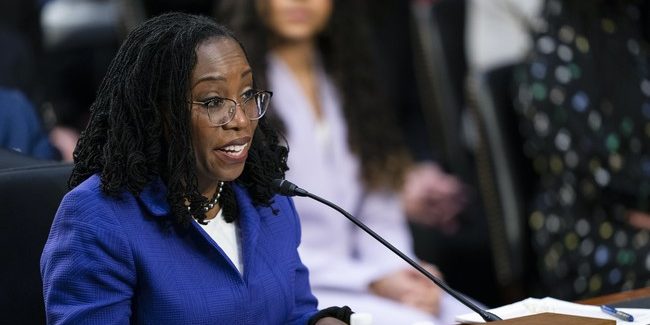 In a situation almost beyond belief, the individual who’s been heralded by the liberal media and Democrats for her historic status as the first black woman to be nominated to the Supreme Court is unable to define “woman,” according to her testimony late on Tuesday night.

The somewhat ironic if not tragic revelation came courtesy of a line of questioning from Senator Marsha Blackburn (R-TN) who — even some 13 hours after the hearings started — was fired up and ready to roll.

“Can you provide a definition for the word woman?” Blackburn asked.

“Can I provide a definition?” Judge Jackson responded somewhat surprised.

“Mmm, not in this context — I’m not a biologist,” Judge Jackson said.

Yes, really. Here’s the exchange in all its unbelievable glory:

So Judge Jackson is expected to be able to interpret the law for all Americans but cannot, evidently, interpret what it means to be a woman enough to offer even a simple definition for the term… because she’s not a biologist? Any stranger on the street, a kindergartener, your crazy uncle even, could have offered a better answer to the question. One need not be a biologist to know what a woman is.

But Judge Jackson, as anyone who’s been following President Biden’s quest to fill the looming Supreme Court vacancy created by Justice Stephen Breyer’s retirement, has been touted repeatedly for her identity as a black woman, the first of which to be nominated to the highest court in America.

President Biden has nominated Judge Jackson, Democrats have continued hammering the historic nature of his nomination. So too has basically every piece of mainstream media coverage emphasized her identity as a black woman in ledes and headlines.

Yet this historic nominee herself cannot define “woman.” Senator Blackburn told Townhall Tuesday night following her exchange with Judge Jackson that “It is stunning that someone who is seeking to be on the Supreme Court can’t provide a one sentence definition on the word woman.”