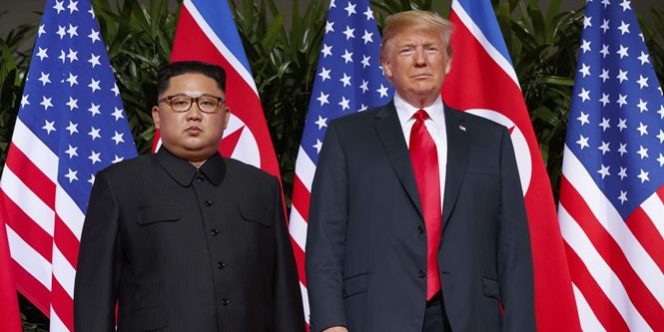 The nuclear summit between President Trump and North Korean dictator Kim Jong Un fell apart Thursday when the parties failed to reach a deal over the issue of sanctions relief.

In a news conference Trump explained the meeting ended abruptly because of Kim’s insistence on lifting sanctions without committing to the elimination of his country’s nuclear arsenal. “I am always prepared to walk,” Trump told reporters. “I am never afraid to walk from a deal.”

“I’d much rather do it right than do it fast,” the president said. “We’re in position to do something very special.”

Mr. Trump said that Mr. Kim was prepared to dismantle the North’s Yongbyon nuclear complex, the site of a reactor and plutonium-reprocessing facility, if sanctions were lifted. Mr. Trump said Washington wanted a deal to include other parts of the North’s nuclear program, including undeclared sites for producing highly enriched uranium.

“Basically, they wanted the sanctions lifted in their entirety and we couldn’t do that,” Mr. Trump said. “I just felt it wasn’t good enough,” Mr. Trump said of the Yongbyon offer. “We had to have more.” […]

Earlier, Mr. Trump told reporters that he wasn’t in a hurry to reach a deal as long as North Korea didn’t conduct nuclear and missile tests, and asserted he was optimistic that an accord to denuclearize the peninsula would eventually come.

In front of the cameras earlier in the day, the two leaders appeared friendly, exchanging pleasantries, with Mr. Trump predicting that “no matter what happens, we’ll ultimately have a deal that’s really good for Chairman Kim and his country.” But he added: “It doesn’t mean we’re doing it in one day, in one meeting.”

Mr. Kim, too, had sounded an upbeat note. Asked by an American reporter if he was willing to denuclearize, Mr. Kim replied: “If I’m not willing to do that, I wouldn’t have come here.” (WSJ)

There was also some common ground on the issue of whether the U.S. might open a liaison office in North Korea–a question asked of both leaders by a reporter. Trump called it “not a bad idea” while Kim said it would be “welcomable.”

The two were expected to sign a joint agreement Thursday afternoon, but that ceremony was cancelled along with a scheduled lunch meeting.

Trump is now heading back to Washington.