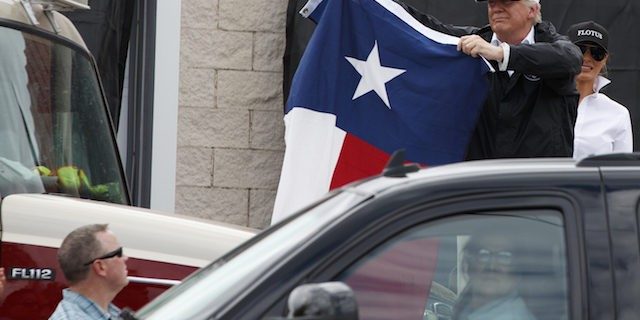 President Trump is requesting that nearly $6 billion be made available for the Harvey recovery process. The administration urged Congress on Thursday to approve and provide $5.95 billion for the initial response and recovery efforts related to the devastating hurricane affecting parts of Texas and Louisiana, Axiosreported.

A senior administration official told the website that White House Budget Director Mick Mulvaney will be calling Republicans and Democrats on Capitol Hill this week, asking them for their support on the funding plan.

The official added that the Trump administration believes the requested amount will be more than enough to support hurricane recovery efforts until year’s end. If approved by Congress, $5.5 billion would go to the Federal Emergency Management Agency (FEMA) for its disaster relief operations and $450 million to the Small Business Administration to assist affected businesses. To access the funding, the U.S. debt limit would have to be increased – a move that would aim at lowering the risk of default, Bloomberg Politicsreported.  A separate official told the news site that the White House was looking to extend the limit long enough to move back the threat of default until Congress is able to draft a budget for the full federal fiscal year. Trump has expressed his desire to move swiftly on recovery efforts and rebuild damaged areas in Houston and southeast Texas. Some Democrats have said that the area could need more than $150 billion in federal aid. The initial request is expected to be a down payment on a larger federal aid package, the Washington Post reported.

The news came on the same day that President Trump pledged $1 million of his personal money to aid victims of Hurricane Harvey in both Texas and Louisiana.“The president is pledging a million dollars of personal money to help,” White House press secretary Sarah Sanders told reporters Thursday. Sanders said the president asked that she “check with” reporters for “suggestions” on groups and organizations that would be “best and most effective in providing aid.” The press secretary was asked whether Trump would pay the $1 million from his personal funds, or from the Trump Organization. “I know the president said he was going to give — I don’t know the legal part of exactly that, but he said his personal money,” Sanders answered. “So I assume that comes directly from him.”