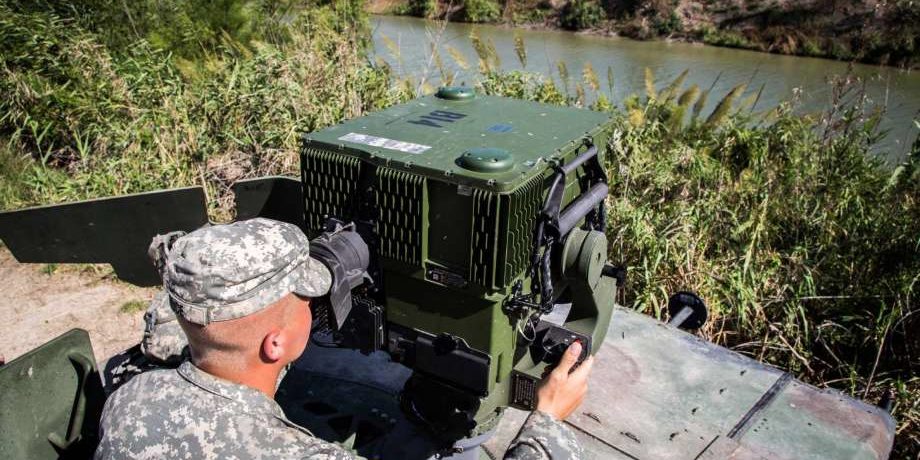 President Trump on Tuesday said that the U.S. will secure the southern border with the military until a wall can be built, calling the move a “big step.”

Trump made the remarks during a meeting with Baltic leaders, where he said he had discussed the matter with Defense Secretary Jim Mattis.

“Until we can have a wall and proper security, we’re going to be guarding our border with the military,” he said. “That’s a big step, we really haven’t done that before, or certainly not very much before.”

Trump did not offer more details, but the move appears to have been at least partly motivated by a caravan of over 1,000 Central American migrants heading toward the U.S. border. Buzzfeed, which first reported on the caravan, said that Mexican officials had not yet attempted to stop the flow. Reports of the caravan angered Trump, who has sent out a number of tweets threatening to end the North American Free Trade Agreement (NAFTA) and to cut foreign aid to countries such as Honduras, from where many of the migrants originate. “The big Caravan of People from Honduras, now coming across Mexico and heading to our “Weak Laws” Border, had better be stopped before it gets there,” he tweeted Tuesday. “Cash cow NAFTA is in play, as is foreign aid to Honduras and the countries that allow this to happen. Congress MUST ACT NOW!”

The Pentagon was scrambling to come up with a response to Trump’s statement on the military guarding the border. But according to a memo obtained by Fox News and discussions with officials, one area where the Pentagon could contribute immediately is the Air Force’s Barry Goldwater live-fire range, which shares a 35-mile border with Mexico in southern Arizona.

The Defense Department is already offering some support to the border, including U.S. Navy ships patrolling waters to seize drugs as well as missions involving over 100 personnel from U.S. military’s northern command — including eight planes and a drone — to help border patrol.

Trump has struggled to secure funding for his central campaign promise of a wall, which the administration and border officials say will cost approximately $20-25 billion. In the omnibus bill signed by Trump last month, $1.6 billion was included for technology and some replacement of existing border fencing — although it excluded the prototypes Trump recently viewed in California. Trump briefly considered vetoing the legislation both over its lack of funding for the wall and also the failure to include a fix for the expiring Deferred Action for Childhood Arrivals (DACA) program that granted protection for illegal immigrants brought to the country as children. He has since floated the idea of getting the Pentagon to fund the wall.