Trump, in speech to Congress, calls to ‘restart the engine’ of US economy 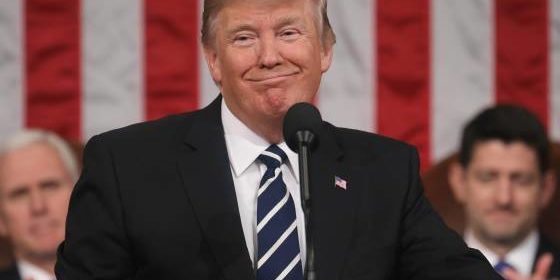 President Trump declared Tuesday that a “new chapter of American greatness is now beginning” as he made economic revival the centerpiece of his first address to Congress – issuing a clarion call to “restart the engine of the American economy” through tax cuts, better trade deals, immigration enforcement and a $1 trillion infrastructure program.

He also called on Congress to replace what he called the “imploding ObamaCare disaster” with legislation that lowers costs and expands access, an ambitious goal for GOP lawmakers still trying to come together on a plan.

The president outlined his agenda in an address to a joint session of Congress that lasted roughly an hour and focused largely on priorities at home, more than abroad. He offered a decidedly upbeat vision for the future of the country that stood in contrast to his at-times foreboding inauguration address. “Everything that is broken in our country can be fixed. Every problem can be solved. And every hurting family can find healing, and hope,” Trump said, urging lawmakers to “join forces” to deliver.

Trump for the most part traded the contentious and punchy tone of the last few weeks for loftier – some might say more presidential – rhetoric. Declaring “the time for small thinking is over,” Trump appealed to the country to “believe, once more, in America.”

“A new chapter of American greatness is now beginning. A new national pride is sweeping across our nation,” he said. “And a new surge of optimism is placing impossible dreams firmly within our grasp.” He described his address as a “message of unity and strength.” The generally well-received speech could mark an opportunity for Trump to reset his young presidency after a rocky start in which clashes with the media and staffing controversies at times overshadowed action on the jobs front.

In perhaps the most memorable moment of the night, the audience broke out into extended applause as Trump introduced the widow of William “Ryan” Owens, the Navy SEAL killed in a raid in Yemen last month. Carryn Owens sobbed as lawmakers gave her a standing ovation and Trump said the raid he participated in yielded vital intelligence. His “legacy is etched into eternity,” Trump said.   In between the more dramatic moments were a host of policy prescriptions that could have a big impact on discussions in Congress. Trump called for a “national rebuilding,” urging Congress to pass legislation that produces a $1 trillion public-private investment in infrastructure. Speaking to a key campaign promise that has yet to be realized, he said his team is developing “historic tax reform that will reduce the tax rate on our companies so they can compete and thrive anywhere and with anyone.” He vowed a “big, big cut” including “massive tax relief for the middle class.” And he urged Congress to replace ObamaCare “with reforms that expand choice, increase access, lower costs, and at the same time, provide better health care.”

He outlined “principles” to guide negotiations, including a call for Americans with pre-existing coverage to keep access to care, for states to have “flexibility” with Medicaid, and for Americans to be able to buy insurance across state lines.  Calling education the “civil rights issue of our time,” Trump also urged Congress to pass an education bill funding “school choice.”

While laying out his agenda, Trump touted his early-administration accomplishments while claiming he inherited many problems.  And as he did during the presidential campaign, he pushed a nationalist message, making big promises for what will happen when America puts its citizens first: “Dying industries will come roaring back to life. … Crumbling infrastructure will be replaced with new roads, bridges, tunnels, airports and railways gleaming across our very, very beautiful land. … Above all else, we will keep our promises to the American people.”  He said his job is to represent the United States, not the world. In calling to “restart” the American jobs engine, Trump said the U.S. must make it “easier for companies to do business in the United States, and much, much harder for companies to leave our country.”  He also defended his stepped-up deportations and other border security plans, casting his immigration agenda as part of the broader economic plan. By enforcing immigration laws, he said, “we will raise wages, help the unemployed, save billions and billions of dollars, and make our communities safer for everyone.” He joined GOP lawmakers seeking reforms to legal immigration – and potentially reopened the broader debate in Congress by saying immigration reform is possible.

Trump’s first official status report to Congress came amid a fast-paced opening volley of activity at the start of his term: a slew of executive actions, a forthcoming budget proposal and various side-deals with American companies aimed at creating jobs. Trump was eager to highlight those accomplishments, but also faces early challenges: an order suspending refugee and other admissions on hold by the courts, questions about his team’s contacts with Russia and a Congress that has not yet moved legislation on key priorities. The biggest task ahead is Republicans’ drive to repeal and replace ObamaCare. As Trump appealed for a comprehensive package, some in the party have been divided over the plans being privately discussed at the Capitol.  House Speaker Paul Ryan played down divisions ahead of Tuesday’s speech. “This is a plan that we are all working on together,” he told reporters. “There aren’t rival plans here.”  After the speech, Ryan applauded Trump for what he called a “home run.”

But the official Democratic response offered a reminder of the resistance Trump will face on his legislative agenda, particularly on ObamaCare. Former Kentucky Gov. Steve Beshear warned those efforts would strip affordable health insurance from Americans. “This isn’t a game. It’s life and death for people,” he said.