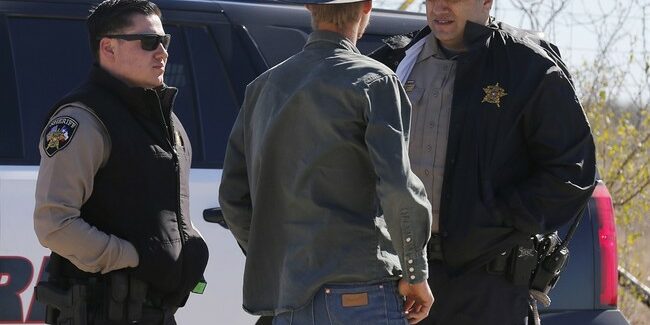 As more information becomes available in the wake of the deadly Uvalde elementary shooting, people are asking eyebrow raising questions on whether more children could have been saved had law enforcement been prepared.

“Stop the killing- solo response to active shooter events,” “Stop the dying” Transitioning to First Aid and Evacuation,” and “Active shooter scenario training and evaluation” were among the topics covered during the course.

The training was mandated by Texas House Bill 2195, which states that school resource officers must complete the training.

According to the course description , it says “First responders to the active shooter scene will usually be required to place themselves in harm’s way…time is the number-one enemy during active shooter response. … The best hope that innocent victims have is that officers immediately move into action to isolate, distract or neutralize the threat, even if that means one officer acting alone.”

Photos show police officers role playing different scenarios that may happen during an active shooting situation.  The course also prepared the students and officers for a barricade situation, similar to the actual event that took place earlier this week. “The student will be able to compare/contrast an active shooter event and a hostage or barricade crisis…a simple barricade crisis develops when an armed actor(s) isolates themselves with little or no ability to harm innocent others. Barricaded subjects pose the greatest threat when attempts are made to enter the space and subdue them.”

Uvalde law enforcement waited outside of the school for almost an hour before entering the building to stop the shooter. Parents desperately begged for them to do something, but according to Texas Department of Public Safety Steven McCraw, the on-scene commander believed it was just a barricade situation and that no children were still at risk, despite 19 children and two adults being killed.