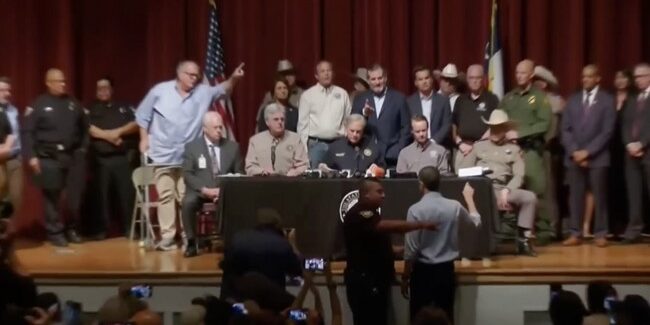 Following Robert Francis “Beto” O’Rourke’s unhinged outburst at a Wednesday press conference held by Governor Greg Abbott, Townhall’s Julio Rosas caught up with Uvalde Mayor Don McLaughlin to get his response — and McLaughlin didn’t hold back in his appraisal of O’Rourke or those who’ve apparently criticized the small city’s mayor for ordering the Democrat candidate for governor to leave the venue.

McLaughlin told Townhall that if Democrats want to “have that discussion, that’s fine, but that event was not the place or the time to come in there and attack the governor or anybody else there,” the mayor said. “If [O’Rourke] wants to have that discussion, have it outside somewhere. But not in that building where we’re trying to give the people there [information].”

“This community is broken right now,” continued McLaughlin. “No community should have to go through what we’ve been through in this community, and for a person to come in there and start that crap — I have no respect for Beto,” he reiterated. “And the haters that hate, that send me the emails and the texts, to hell with you too,” the mayor added after apparently receiving criticism for scolding O’Rourke as he stormed the press conference stage on Wednesday.

“I don’t care if you’re a Democrat, a Republican, an independent,” McLaughlin noted, “we’re American people — we’re trying to come together as a community. To do what [O’Rourke] did today at that press conference was wrong. I’m sorry, but it was wrong,” he concluded.

Mayor McLaughlin’s comments came after O’Rourke made a fool of himself while apparently trying to score political points and relevance in his race to unseat Abbott as governor of the Lone Star state.

While mainstream outlets and anti-gun liberals heralded O’Rourke’s supposed “bravery,” it’s clear that his actions were a sickening political stunt that came as some families still hadn’t been reunited with their loved ones in the wake of the horrific shooting that took the lives of 19 students and two teachers at Robb Elementary School on Tuesday. In case you missed it, here’s O’Rourke’s outburst from Wednesday: