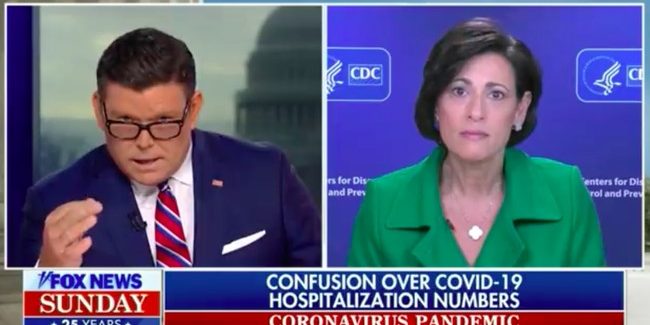 If you missed it on Friday, go back and read Katie’s piece flagging Supreme Court Justice Sonia Sotomayor’s airing of flagrant COVID misinformation during last week’s oral arguments on various pandemic-related federal mandates.  Sotomayor made reference to a “blood-borne” virus (which we all know is not the case with COVID), claimed that the current Omicron variant is as deadly as the Delta variant — and asserted that there are 100,000 American COVID-hospitalized children in serious condition at the moment, “many” of whom are on ventilators.  This alarming statistic is an all-time high, she said.  It was total nonsense.  Omicron appears much less lethal than Delta, and the leftist justice didn’t even approach any universe of accuracy on child hospitalizations:

On Fox News Sunday, anchor Bret Baier asked CDC Director Dr. Rochelle Walensky about Sotomayor’s claims.  Walensky had no choice but to concede that other countries’ data suggest that Omicron isn’t as lethal as Delta, couching her answer as mildly as possible:

“It may not be” is vastly under-selling the reality.  At the end of 2021, officials in South Africa (where the population is far less vaccinated than it is here) announced that that its nation’s Omicron wave had passed “with no big spike in deaths.”  In the United Kingdom, the data has been showing that Omircon is much less likely to require hospitalization.  Here at home, the Daily Mail reports, death rates are down despite an explosion of cases: “While Omicron drives record COVID-19 case increases in the U.S., deaths have stayed relatively low so far…Experts say the U.S. is showing signs of ‘decoupling,’ in which increases in hospitalizations and deaths no longer directly follow increases in cases.”  The World Health Organization has also cited data pointing to Omicron being milder.  It may be the case that the US Omicron wave is more deadly than it is elsewhere, due to factors like obesity, but there is no strong evidence whatsoever that the current strain is anywhere near as deadly as Delta.  A great deal of evidence points in the opposite direction.  As for Sotomayor’s butchering of the numbers on kids, which further spread hysteria-fueling misinformation, Walensky very quickly confirms how wildly far off the justice was, then immediately moves on to talking points on vaccines:

Sotomayor claimed there are some 100,000 children in serious condition from COVID, “many” requiring ventilators.  The true number of hospitalized children in the country is in the ballpark of 3,500.  A small percentage of those are in serious condition or on ventilators.  By contrast, a large percentage of those hospitalizations are incidental — meaning vast numbers of these children showed up at the hospital for conditions or issues other than COVID, but happened to test positive in required testing upon admittance.  It would be fascinating to know where Sotomayor got her embarrassingly bogus stats, assuming she got them somewhere other than the top of her head in the moment.  As I noted last week, it seems as though we have permission from the likes of Dr. Fauci and states like New York to talk openly about the “with vs. of” distinction on COVID hospitalizations.  This has been a real and important phenomenon throughout the pandemic, but at last it’s no longer being treated as “denialism,” or whatever.  The result?

Hospitals across the U.S. are feeling the wrath of the omicron variant and getting thrown into disarray that is different from earlier COVID-19 surges. This time, they are dealing with serious staff shortages because so many health care workers are getting sick with the fast-spreading variant. People are showing up at emergency rooms in large numbers in hopes of getting tested for COVID-19, putting more strain on the system. And a surprising share of patients — two-thirds in some places — are testing positive while in the hospital for other reasons.

The Associated Press suggests this is a “surprising” finding, but is it?  We know that there has been some degree of substantial over-counting of hospitalizations of or from COVID throughout this whole ordeal.  A study published last year on pediatric hospitalizations gave us a glimpse of this reality, but it was largely ignored.  Question: If COVID hospitalizations have been inflated through this effect, what about deaths?  Baier asked Walesnky this important question, and she punted:

His inquiry was about COVID deaths generally, and she shifted to Omircon, stating that the data “will be forthcoming.”  Why don’t we have an idea of exactly (or even approximately) how many of the 830k+ deaths were directly caused by the virus, how many were perhaps virus-related, and how many were mostly or entirely incidental?  Do officials have a general sense of that at all?  Are they not interested?  Are they not sharing their findings or beliefs on this front with us?  One can believe — as I do — that COVID is serious, and that vaccines are essential to limiting severe outcomes and deaths…while also wanting these answers.  The more accurate the picture, the better.  I’ll leave you with a correction of a bogus “both sides” criticism of Justice Neil Gorsuch, who was accused by some Sotomayor apologists of also sharing false information about COVID and public health during Friday’s oral arguments.  He did not: