‘Where Is She?’ MSNBC Host Rips Kamala Harris For Being a Miserable Failure on the Border 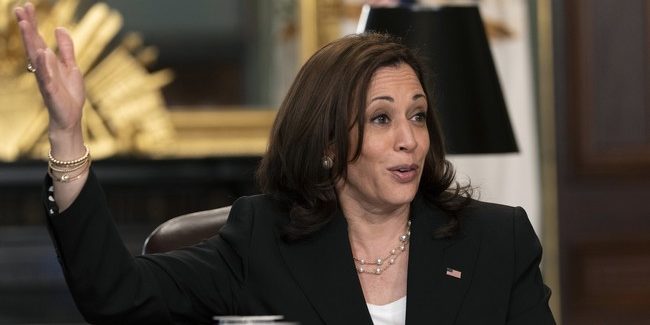 Joe Biden entrusted her with getting the border under control. She dilly-dallied and didn’t visit the southern border until Donald Trump and Greg Abbott decided to hold an event there to highlight the ongoing crisis. This was 100 days after being tapped by President Brain Worm. Now, we’ve had consistent months where some 200,000 illegal aliens that we know about have been detained by Border Patrol. It’s unsustainable. It’s an open border policy without the Biden crew explicitly saying so. Now, we have tens of thousands of Haitians from Latin America who resettled there a decade ago after the 2010 earthquake. Border Patrol is once again being attacked by the Biden administration after video shows agents using horses in trying to maintain law and order. They were not whipping these illegals. That’s fake news, but the images of all these illegals being huddled under highway overpasses just demonstrated the extent of the Biden White House’s failure at the border.

First, it’s obvious they don’t care. It’s all part of the plan; you all know this. Yet, even some liberal networks are wondering where the hell is Kamala Harris…which brings us back to the initial point. MSNBC’s Stephanie Ruhle was wondering where the VP was in all of this (via Fox News):

MSNBC anchor Stephanie Ruhle criticized Vice President Kamala Harris Monday for being missing in action during the ongoing crisis on the southern border.

Startling images of thousands of migrants camped under the International Bridge in Del Rio, Texas over the weekend confirmed that the situation on the border remains chaotic. Texas Gov. Greg Abbott has determined the situation to be so dire that he’s asked President Joe Biden for a federal emergency declaration, saying that as of Saturday there were nearly 16,000 migrants in Del Rio.

“How about the message from our Vice President?” Ruhle asked Monday. “Where is she? She was supposed to be in charge of all of these migration issues, going to those Northern Triangle countries that’s obviously not Haiti.”

Ruhle reminded viewers that on her trip to Guatemala to spearhead diplomatic outreach on the crisis, Harris told migrants rather pointedly, “do not come.”

“Well, we haven’t heard a lot from the vice president,” NBC News correspondent Julia Ainsley answered. She also noted that much of Harris’ work was in Mexico, but that the U.S. is now seeing a “breakdown” in that cooperation.

The adults are back, huh? What a trainwreck. Besides not caring, this is an administration that thinks if they give a speech, they can check it off the to-do list. That’s not how any of this works. Even an eighth grader would know that. This, coupled with the lack of attention and care, makes way for a toxic cocktail in the public policy forum.  The “people aren’t listening,” says Ruhle. Well, yeah—they don’t think this is a crisis. You can’t even call these people illegal aliens because of political correctness, which is another appalling aspect of this administration’s ethos when it comes to governing. By simply not calling it ‘a crisis’, there is no crisis. If you just change the language, the problem just vanishes. This is a governing mindset that’s not real. It’s not grounded in reality. It’s insane, really. It’s explains a whole lot about how Joe Biden and Harris deal with various crises.