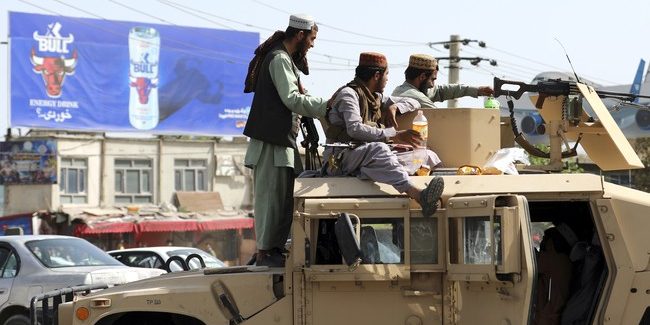 We discussed this on the Triggered Podcast yesterday, but the fallout from Joe Biden’s failure in Afghanistan could have devastating consequences abroad that go beyond the issue of eradicating radical Islamic terrorism. The chaos in Kabul is a stain on this presidency that’s not even a year old. They couldn’t manage a withdrawal. Desperate Afghans are clinging to US Air Force planes as they take off. They’ve fallen to their deaths. It’s an ignominious end to our longest war. And now, the Taliban have helicopters, Humvees, MRAPS, and scores of weapons that we didn’t destroy. We left Bagram Air Force base which housed at least 5,000 terrorists. The Taliban has released them all. There are 5-10,000 Americans still trapped in the country. How will they get out? We don’t know. The Pentagon has no plan, and the Biden White House couldn’t guarantee that all could be safely evacuated. Yet, let’s go beyond Afghanistan. Former CIA operative Bryan Dean Wright had a chilling thread about what could be ahead in the aftermath of Afghanistan’s collapse.

He noted how his colleagues in the intelligence community are furious over this situation. The failure in Afghanistan showed the world that the US can’t deploy our intelligence or military resources effectively.

“The blame lays at the feet of multiple Presidents. The Generals. The Spies. The Congress. America’s Elites are trash,” Wright wrote. But it’s the China and Russia angles we need to watch:

The fear is that China & Russia will act in concert. Why?

America was whipped by a tiny rebel force and couldn’t even retreat properly.

Meanwhile, the American people are angry, COVID weary, & divided. If there were ever a time to push American hegemony aside, this is it.

But who will trust America after Afghanistan?

Who believes we have the leadership to use our military might well?

Beyond China/Russia, others will take gambles too.

Terror orgs like al-Qa’ida & ISIS are degraded but not dead. Their ideology is very much alive.

Iran’s Hizballah — with terror cells throughout the US — may see an opening to create chaos too.

There’s also the nightmare of tactical weaponry now awash in Afghanistan, in the hands of the Taliban and — soon — on the global black market.

These arms will fuel chaos around the world for decades.

There’s a reason why Wright said that we could be entering one of the most dangerous and unpredictable times in modern history. This thread captured that. Why not take things for a spin? Everyone saw how weak Obama was abroad and how predictable he was. It’s how Russia was able to run roughshod over the US for years. They annexed Crimea and Obama did nothing. They entered Syria—and Obama did nothing. Strong leadership is required to keep the US level and there is no way Biden could handle China and Russia and terror groups challenging American power. Biden can barely handle evacuating the US Embassy staff out of Kabul. The man gave some remarks about how he was awesome in Afghanistan and how it’s everyone else’s fault…and then goes back on vacation? He can’t do the job. And if I were America’s enemies, I’d be plotting perpetually. This guy will never be able to handle the pressure. He’s already on the verge of stroking out.