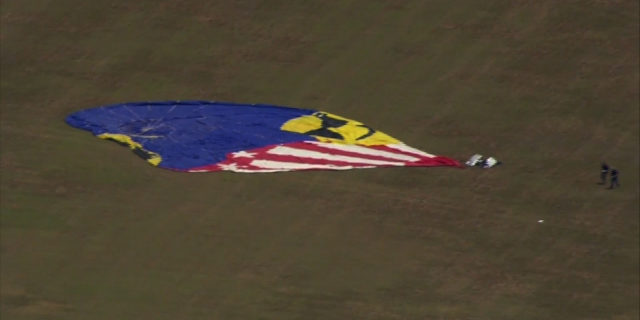 A hot air balloon hit high-tension power lines before crashing into a pasture in Central Texas, killing all 16 on board, according to federal authorities investigating the worst such disaster in U.S. history.

A power line was tripped at 7:42 a.m. Saturday, and the first call to 911 came a minute later, National Transportation Safety Board member Robert Sumwalt said during a news conference. The crash site was near a row of high-tension power lines, and aerial photos showed an area of scorched land underneath.

“There is physical evidence to indicate that the balloon, or some component of the balloon, hit the physical wires themselves and not the tower,” Sumwalt said.

The NTSB will look at several factors including reports of foggy weather, but is concentrating first on gathering evidence such as witness statements.

Texas Gov. Greg Abbott and his wife expressed their sympathy in a statement, saying “[We] extend our deepest condolences for all those who have been affected by today’s heartbreaking tragedy. Our thoughts and prayers are with the victims and their families, as well as the Lockhart community.”