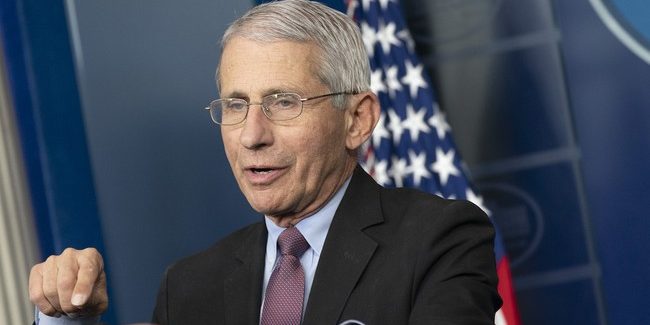 So, it was all theater. It was all for show. And yet we have another reason for why Dr. Anthony Fauci has to go. How long will we be subjected to the schizophrenic regime of this dude? We have talk from Democrats about Trump and the ‘big lie’ concerning the 2020 election. On COVID, it’s all about the ‘noble lie.’ It’s a mixture of fear and a ‘you can’t handle the truth’ mindset that has taken hold with these folks, possibly to hide the fact that they know nothing. Or worse, they know how to control the public. It’s probably a combination of both.

Let’s circle back to when Sen. Rand Paul (R-KY) made a scientifically accurate statement concerning mask-wearing among those who have acquired immunity from COVID in March. Re-infection rates for those who’ve already had the virus are immensely low. Those who are vaccinated fall within this group as well. You’re immune. You have the antibodies, and you’re not going to spread the virus. So, why should you keep wearing a mask? Joe Biden, Fauci, and most of Congress have been vaccinated. Why keep wearing a mask, especially when we were initially told not to by the so-called experts? Isn’t it theater? Fauci was not pleased.

“Let me state for the record that masks are not theater. Masks are protective,” he said.

Well, now it’s a different story. First, he said what we already knew about the vaccine, which is that it makes subjects who have taken it “dead ends” for the virus. Second, he also said that even those who have been vaccinated and contract sill the virus, which is also extremely rare, don’t need to wear a mask since their viral load is so low. Third, he finally admitted his mask-wearing was more a show.

“I didn’t want to look like I was giving mixed signals but being a fully vaccinated person, the chances of my getting infected in an indoor setting is extremely low,” he said today.

The whole basis for mask-wearing for the fully vaccinated collapsed when they nixed the mandate for outdoor use, which was already not being followed because it’s stupid and not based on science. But if one domino falls, they all do. Costco, Walmart, Starbucks, Trader Joe’s, etc. are some of the chains that have announced the fully vaccinated can stop wearing masks at their locations. Disney World stopped temperature checks and outdoor mask-wearing as well. Masks indoors are still required but it’s only a matter of time before that’s nixed. Texas and been open for weeks. No spikes—and they torched their mask mandate. Florida is the same way. It’s not a dead zone.

The CDC’s “impending doom” scare tactics failed. Nothing happened—and the protocols over a virus with a 90+ percent survivability rate seem rather silly now. The vaccines are rolling. We have reached herd immunity in some parts of the country. COVID is over. The Left may not like it. Liberals may not like it. The tribe that loved to virtual signal and chant ‘follow the science’ isn’t saying that now the CDC tweaked their mask guidelines which is hilarious to watch. Live in fear if you want, but we normal people want to get on with our lives and if you can’t handle that—stay inside. In fact, it’s best you do. The ones who are most likely to cause a scene are white liberals, who are the worst. Keeping from public view on its own is a step in the right direction regarding anything relating to public health.

Last note, it’s not the first time Fauci has been wrong. On top of this lie, we have his Wuhan lab leak take: