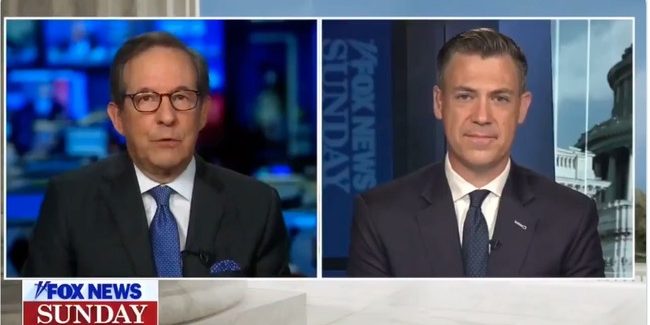 Throughout the segment, Rep. Banks emphasized that Pelosi objected to such picks because she was afraid of “tough questions.” She’s also “only interested in a narrative,” and answers which fit that narrative, Banks offered, and that “that’s all that this comes down to,” which includes how “she has already predetermined a narrative about Donald Trump, about Republicans.”

Banks found out over Twitter that Pelosi objected to him being picked, he shared with MacCallum. Earlier that day he was meeting with the head of the U.S. Capitol Police Union. “They weren’t prepared for it, they weren’t trained for it, and, maybe most important of all, they weren’t equipped for it,” he said, noting the police “lacked equipment” when it came to “something like what at that point should have been expected would occur.”

Banks explained how it all comes back to Nancy Pelosi because as the speaker, she “has more control and authority and responsibly over the leadership of the Capitol Police than anyone else in the United States Capitol.” He went onto explain “she doesn’t want us to ask these questions because at the end of the day she is  ultimately responsible for the breakdown of security at the Capitol that happened on January 6th.”

Banks made it clear that he wanted to ask such questions to do with the vulnerability of the Capitol on that day, noting how “three weeks before January 6th there were intelligence reports that the leadership of the Capitol Police were aware of.”

Another point of concern also existed with the ramifications of Pelosi objecting to Banks and Jordan, which meant objecting to their questions. “Well, again, it’s clear that Pelosi only wants members on this committee who will stick to her talking points and stick to her narrative. That’s why she’s picked the group that she’s already picked,” he answered when MacCallum showed a clip of Rep. Liz Cheney’s (R-WY)  calling the “rhetoric around this from” Banks “disgraceful.”

“And anyone that she asks to be on this committee, from this point moving forward, will–will be stuck to her– her narrative, to her point of view,” Banks said, referring to Pelosi. “There won’t be another–another side. And that’s–in the history of the Congress, something like this has never happened before. In the history of our country you’ve never had the speaker of the House deny the — the representatives that the minority party submitted for a select committee. It’s never happened before. It’s a break in precedent,” Banks warned. “And as everyone in America knows, you have a majority view, a minority view. That’s the whole point of our committee structure in the Congress.”

He also laid the blame on Pelosi when it comes to a report coming out of the Homeland Security and the Rules Committee from June, which “talked about the systemic failure of leadership and the breakdown of security on January 6.” Banks raised concerns about the documents the speaker’s office did not release, which he suggests aren’t being released because they show that “the speaker was involved and the lack of leadership and the breakdown of security that occurred in January 6th.”

Congress had also considered investigating the Capitol riot in the form of a special commission. While it passed the House with bipartisan support, and did have some Republican support in the Senate, it was ultimately filibustered by Republicans. Some critics in their opposition referenced such other investigations taking place.

News was later leaked by a staffer that Pelosi was going with a select committee, which she confirmed a few days later. Only two Republicans, Reps. Cheney and Adam Kinzinger (IL) voted in favor of it.  After previously playing coy, Speaker Pelosi on Sunday officially named Rep. Kinzinger to fill one of the spots, which he accepted. Cheney had been chosen and accepted last week.

The first hearing is set to take place on July 27.