Gretchen Whitmer Will Be Stripped of Her Emergency Powers 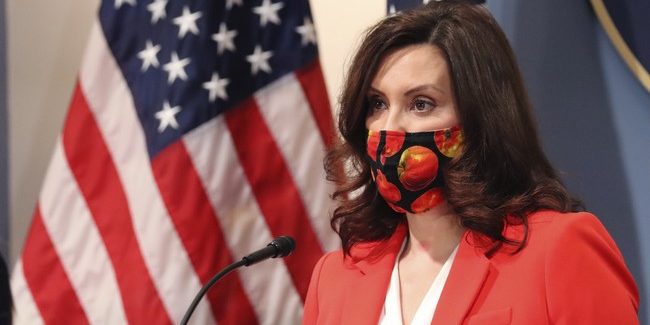 Gov. Gretchen Whitmer (D-MI) will be stripped of the emergency powers she wielded during  the pandemic. On Wednesday, the Michigan state House passed the Unlock Michigan Initiative by a vote of 60-48, Dave Boucher with the Detroit Free Press reported.

The state Senate had already done so on July 15. As was reported last month, the Michigan Supreme Court ruled that the state had to certify the voter initiative. Such an initiative repeals the Emergency Powers of Governor Act of 1945.

Democrats on the Board of State Canvassers wanted to investigate whether the signatures collected for the Unlock Michigan Initiative–which were in excess of the required 340,000 signatures–were collected properly. This comes even after the partisan Democratic attorney general, Dana Nessel, had already done an investigation and decided not to bring criminal charges.

Because the Senate did not vote for the repeal to take place immediately, it will take effect 90 days after the legislative session is formally adjourned, Boucher noted.

“Our Unlock Michigan citizen army collected over 540,000 signatures in just 80 days. Now, 292 days later, we’ll complete our mission with a final vote in the Legislature to end Gov. Whitmer’s rule by decree,” said Fred Wszolek, a spokesman for the Unlock Michigan petition drive.

“Next we’ll turn our attention to the public health law Whitmer abused to destroy lives, businesses and futures. Don’t bet against our success there either.”

Unlock Michigan is already starting to collect signatures for a new petition, one that would require legislative approval for emergency orders from the health department that last longer than 28 days. Whitmer has vetoed GOP legislative efforts to enact this change, arguing health officials need to act quickly in the face of massive threats.

Whitmer has been in the news for other reasons. It was recently revealed that the FBI was involved with the kidnapping plot against the sitting governor in October 2020.

The Department of Justice announced on Friday that it was dropping investigations in all states when it comes to nursing home deaths during the pandemic. While New York and embattled Gov. Andrew Cuomo (D-NY) were under particular scrutiny, such alarming nursing home death rates took place in Michigan as well.