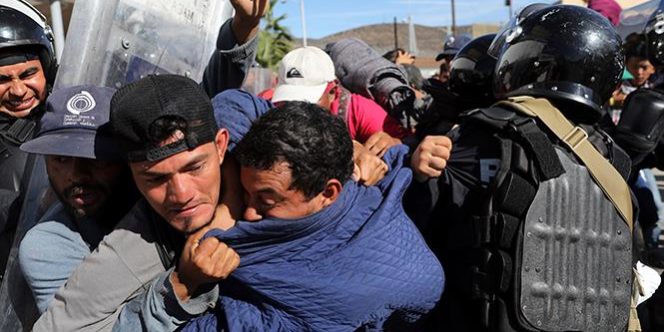 Border Patrol agents revealed in interviews that the migrants storming the U.S.-Mexico border over the weekend were using women and children as human shields as they launched rocks at agents. Border Patrol unleashed tear gas and pepper balls to disperse the crowd of migrants trying to cross the border in Tijuana, Mexico on Sunday. According to San Diego Chief Border Patrol Agent Rodney Scott, agents did not use dispersion techniques until after migrants had struck several agents with projectiles.

“Several agents were actually struck by rocks,” Scott said, before revealing that the migrants pushed women and children to the front of their group to discourage agents from responding to rock-throwing with force. “What we saw over and over yesterday was that the group — the caravan, as we call them — would push women and children to the front and then begin, basically, rocking our agents,” Scott asserted.

Scott further explained that agents did not target women and children with gas, but that “once that chemical is released, it does go through the air.”

Judd explained that the situation at the border yesterday was “unprecedented” and that migrants had never tried before to rush a port of entry. The Border Patrol veteran explained that illegal immigrants often abandon woman and children while being chased by authorities, knowing that they will hinder officers while they abscond.

Judd reiterated the migrants’ strategy during an interview with Fox News on Monday afternoon.

“We were forced to use the action,” Judd said, adding that they did not use “kinetic force” on any children and instead launched tear gas into the area to force the crowd to disperse.