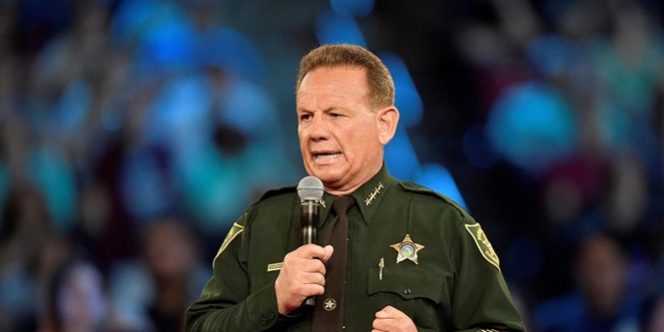 As the hours and days pass, it’s becoming increasingly apparent how terribly law enforcement — and especially the Broward County Sheriff’s office — bungled its collective handling of the Parkland massacre, from ignoring multiple red flags leading up to the horrific incident to deadly inaction during the shooting itself.  We can now add ‘lying after the fact’ to the list.  Facing intense questions about the department’s disastrous response to explicit warning signs about the perpetrator, the Sheriff’s office released an indignant statement at nearly 10 pm on Saturday night.  The media’s coverage was unfair, the memo suggested, because an inaccurate statistic was being reported for public consumption:

I’m not sure it’s a helpful talking point to insist that county sheriffs “only” responded to, um, 23 prior incidents involving the killer or his family, as opposed to 39.  But that’s the line of defense Scott Israel chose to select.  The 39 figure is “simply not true,” he asserts, instructing reporters to cease citing it.  He also rejects the scandalous allegation from other law enforcement officials that multiple county sheriff officers who were on location failed to enter the building while the shooter was still actively spraying students with bullets.  We know this is true of at least one officer, who has resigned; Israel downplays the serious and credible accusation that there were three others as an ‘unconfirmed claim.’  It’s extraordinary to watch this guy engage in damage control just days after he shamelessly joined, and even helped lead, the anti-NRA pile-on at CNN’s ‘town hall’ event.  A polarizing  outside advocacy group sure comes in handy as a scapegoat for deflecting attention away from one’s own lethal failures, which directly contributed to the body count.  Enter Buzzfeed, which has obtained documentation proving that Israel still isn’t telling the truth:

Broward County sheriff’s officials said in a statement late Saturday that they responded only to 23 calls involving suspected Florida school shooter Nikolas Cruz or his family over the years, but records obtained by BuzzFeed News show at least 45 responses since 2008. The number of calls made over the years involving Cruz or his family, according to the call records, are nearly twice the number publicly disclosed by the department. On Saturday night, the Broward County Sheriff’s Office released a statement pushing back on reports that they had been called more than the 23 incidents released by the department…Dispatch records obtained by BuzzFeed News show that, since 2008, there were 22 calls to send deputies to Cruz’s home that have not been publicly disclosed by the department.

The implosion of this man’s credibility is now complete.  In an astonishingly glib and arrogant interview on CNN Sunday morning, in which he was grilled by Jake Tapper, Israel angrily denounced the entirely justified calls for his resignation, praising his own “amazing” leadership of the department.  Remember, this is someone who whipped up the anti-gun crowd in that arena last week, prior to the arrival of villainous Marco Rubio and Dana Loesch.