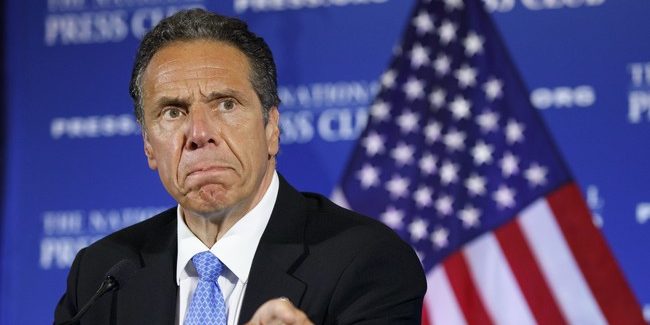 Every time we’d written about New York Gov. Andrew Cuomo’s political fate in the midst of his myriad scandals, we’ve expressed skepticism about the prospect of true accountability.  His approach has been shameless, his resistance to relinquishing power has been complete, and his party has appeared unwilling to force him out.  That combination, merged with New York’s deep blue electoral status, led me to believe that despite being politically wounded, Cuomo had a strong chance of survival — and quite possibly of re-nomination and re-election.  The events of the last few days had me wondering if it was time for that assessment to change, culminating in the governor’s shocking resignation yesterday.  His hand was forced.  A recent survey of New Yorkers from a notoriously blue-shaded pollster demonstrated a dramatic shift against the governor.  In some previous polling, most New Yorkers said they either wanted Cuomo gone immediately, or they didn’t want him to seek another term.  Now?  Strong support for resignation and/or removal:

Just days after the New York Attorney General released a report detailing allegations of sexual harassment from 11 women against Governor Cuomo, voters in New York think 70 – 25 percent that Andrew Cuomo should resign as governor, according to a Quinnipiac University poll of registered voters in New York State released today. The poll was conducted on August 4th and 5th. Democrats say 57 – 36 percent, Republicans say 88 – 11 percent, and independents say 76 – 19 percent that Cuomo should resign. On the question of impeachment, voters say 63 – 29 percent that Governor Cuomo should be impeached and removed from office…More than half of New York voters say 55 – 29 percent that they think Cuomo should be charged with a crime based on what they have heard or read about the allegations of sexual harassment against him, while 16 percent did not offer an opinion. Voters say 70 – 27 percent that they think Governor Cuomo has lost his ability to be an effective leader.

A majority of New York Democrats favored both resignation and impeachment, with most New York voters overall (including a plurality of Democrats) supporting criminal charges against him.  He’d lost the public, including most of his own partisans.  Gruesome stuff, sure, but what was stopping him from waiting out the storm and refusing to budge — think Ralph Northam, post-blackface revelations — in hopes that the political winds shift in such a way that he might regain his footing over the next year?  That was always my theory of how he’d try to play it, no matter how ugly it got.  The game-changer would be genuine, concrete steps toward impeachment undertaken by the Democrat-controlled state legislature, with whip counts unfavorable to Cuomo.  And ultimately, that’s what happened. Lawmakers had been dragging their feet for months, with some Democrats who’d issued empty resignation calls again starting to appear with the governor at chummy events.  His ‘wait it out while lying aggressively’ strategy was working.

But the release of the Attorney General’s report on the sexual misconduct ingredient in his scandal stew shifted the political ground, with shoes dropping left and right.  The White House finally got off the sidelines and called on the man Joe Biden had showcased in primetime at his nominating convention (even after the COVID nursing homes cover-up had been exposed) to step down.  Media outlets started reporting that a majority of Albany legislators had moved in favor of impeachment.  And then came these rumors:

New York Gov. Andrew Cuomo tried to cut a deal with the state Legislature — offering to drop his bid for a fourth-term in exchange for not getting impeached, The Post has learned. But no one seems to be buying what the 63-year-old governor is selling. The three-term Democrat made the dubious offer before Attorney General Letitia James’ damning report on his conduct was released last Tuesday, according to a top party official.

In a recent interview with Janice Dean, who lost both of her in-laws to COVID in New York nursing homes, I predicted that if Cuomo really started to feel cornered, he might ask Democrats to call off the dogs in exchange for offering not to run for a fourth term.  A sign of desperation, perhaps, but an off-ramp for Cuomo in which he could at least pretend that he was controlling his own fate based on his own preferences.  It seems Team Cuomo already attempted this ‘break glass’ emergency maneuver, and it was rebuffed.  The process was moving forward, apparently for real this time.  We even got to the stage where disgraced, complicit Cuomo enforcers were resigning and (allegedly) leaking to the press about how fervently they’ve been pressing the governor to quit:

The inner circle was crumbling, with other (mind-blowingly hypocritical) enablers crashing around him.  He was out of friends, out of people he could intimidate, and out of options.  And it couldn’t have been happening to a nicer, more normal or sane person:

He ordered one aide to memorize the lyrics to “Danny Boy.” She testified he “would pop out” of his office and ask her to start singing. A footnote says it was not the only time the governor asked her to sing. The aide found herself writing to a former staffer, “He just asked me to sing Bohemian Rhapsody so. We aren’t far off from a bedtime story.” He asked her to do push-ups in front of him, and asked what people were saying about the size of his hands. According to the report the aide testified that “she understood the Governor was attempting to get her to say something about the size of his genitals.” Another aide testified that, in complaining to staff that a speech was disappointing, the Governor said something to the effect of “You need to give me some catchy one-liners. Come up with a line like, ‘you’re having sex without the orgasm.’ ”

Mr. Cuomo’s office played a kind of berserk hardball. When news of the sexual-harassment charges broke this March, the governor’s chief of staff asked the state “vaccine czar” to call Democratic county executives and find out if they stood with the governor. The czar was understood to be in charge of vaccine availability and the location of vaccine sites. Demand for vaccines was exceeding supply. The czar called around. One Democratic county executive understood the call to contain an implicit threat regarding vaccine access. He described himself as “stunned” and unsettled by the call. You read all this and think: The governor is a letch, a creep, a dirty old man. But also a nut—a high-functioning one, a politically talented one, but a nut. Only a nut would do these things, and only a nut would think he wouldn’t be found out.

He’s been a deranged, power-drunk nut for quite awhile, it appears, and it’s finally all catching up to him. Another freshly-revealed example via Ronan Farrow has me wondering if anyone in Obamaworld warned the Biden campaign not to hitch their wagon to Cuomo the way they did:

In April, 2014, New York Governor Andrew Cuomo placed a call to the White House and reached Valerie Jarrett, a senior adviser to President Barack Obama. Cuomo was, as one official put it, “ranting and raving.” He had announced that he was shuttering the Moreland Commission, a group that he had convened less than a year earlier to root out corruption in New York politics. After Cuomo ended the group’s inquiries, Preet Bharara, then the U.S. Attorney for the Southern District of New York, issued letters instructing commissioners to preserve documents and had investigators from his office interview key witnesses. On the phone with Jarrett, Cuomo railed against Bharara. “This guy’s out of control,” a member of the White House legal team briefed on the call that day recalled Cuomo telling Jarrett. “He’s your guy.”

Jarrett ended the conversation after only a few minutes. Any effort by the White House to influence investigations by a federal prosecutor could constitute criminal obstruction of justice. “He did, in fact, call me and raise concerns about the commission,” Jarrett told me. “As soon as he started talking, and I figured out what he was talking about, I shut down the conversation.” Although Cuomo fumed about Bharara’s efforts, he did not make any specific request before Jarrett ended the call. Nevertheless, Jarrett was alarmed and immediately walked to the office of the White House counsel, Kathryn Ruemmler, to report the conversation. Ruemmler agreed that the call was improper, and told Jarrett that she had acted correctly in ending the conversation without responding to Cuomo’s complaints. “I thought it was highly inappropriate,” the member of the White House’s legal team told me. “It was a stupid call for him to make.” Ruemmler reported the incident to the Deputy Attorney General, James M. Cole, who also criticized the call.

Team Obama was so horrified that Cuomo ended up being a featured speaker at the next two Democratic National Conventions, a celebrated and lionized party member in good standing.  But now, evidently, the truth could be told because the man had become expendable (and worse, a liability).  Valerie Jarrett sliding the knife was clearest signal that Cuomo was toast.  Andy McCarthy was right that the walls truly were closing in on New York’s arrogant, bullying, lying, cretin-in-chief.  And now he’s out.  Good riddance.  But the sexual misconduct was only party of the story.  The nursing home deaths cover-up must still be fully investigated, with full accountability for everyone involved. Here’s a question: Is another Cuomo brother in real danger of losing his job?

I’ll leave you with this must-listen interview with Janice Dean, reacting to Cuomo’s announcement: