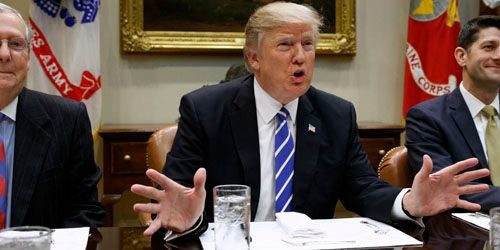 The federal official tapped by an outgoing Obama appointee to lead the Consumer Financial Protection Agency filed a lawsuit on Sunday challenging President Trump’s decision to instead appoint his budget director to the post – setting up a Monday showdown at the controversial agency. The disputed appointment has pitted the Trump White House and Justice Department against top congressional Democrats, with House Minority Leader Nancy Pelosi, D-Calif., and Senate Minority Leader Chuck Schumer, D-N.Y., saying Deputy Director Leandra English should serve as acting director until a new boss is confirmed.

“[T]he Trump administration is ignoring the established, proper, legal order of succession that we purposefully put in place, in order to put a fox in charge of a hen house,” Schumer said in a statement.

English, who was named the successor to the top position at the agency by its outgoing director, is now seeking in court a declaratory judgment and temporary restraining order to block White House budget director Mick Mulvaney from taking over the bureau. She claims Trump did not have the authority to make that appointment.  The White House said Monday it is “aware” of the suit, but cited an opinion in their favor from the bureau’s own general counsel and said “the law is clear.”

“Now that the CFPB’s own General Counsel – who was hired under [outgoing director] Richard Cordray – has notified the Bureau’s leadership that she agrees with the Administration’s and DOJ’s reading of the law, there should be no question that Director Mulvaney is the Acting Director,” White House Press Secretary Sarah Sanders said in a statement. “It is unfortunate that Mr. Cordray decided to put his political ambition above the interests of consumers with this stunt. Director Mulvaney will bring a more serious and professional approach to running the CFPB.”

The White House also cited an opinion issued Saturday by the Justice Department’s Office of Legal Counsel saying it is within the president’s right to appoint an acting director. Steven A. Engel, newly confirmed head of the office, wrote that while the deputy director could serve as acting director under the statute, the president has the power to make appointments under the Vacancies Reform Act. But English argues that the Dodd-Frank Act, a law championed by Democrats that created the Consumer Financial Protection Bureau, prohibits the White House from naming the director for the agency. English said she became the acting director of the bureau under the law after Richard Cordray, the now-former director, resigned last Friday.

Cordray was appointed by President Barack Obama and has been the subject to criticism from congressional Republicans who said he was overzealous. The new director will have to go through the Senate confirmation process. South Dakota Republican Sen. John Thune said Sunday the Republicans will act quickly to confirm the successor to Cordray. Thune added that Mulvaney “will be on the job and he’ll be calling the shots over there” but was aware that the issue may end up in court.

The consumer protection agency was created following the fallout of the 2008 financial crisis and was given an authority as a watchdog for consumers dealing with banks and credit card, student loan and mortgage companies.