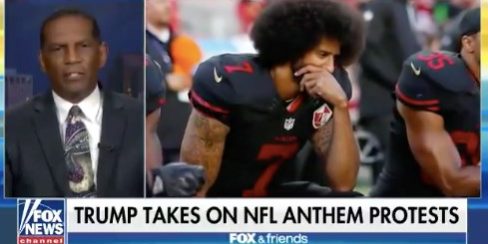 “Let’s start off with what most of us recognize. Our institutions are under attack – God, family, country. I am so excited to be having these conversations today,” Owens said. “And it would only happen because we are having a president who is willing to tweet and drive the left nuts.”

As for the NFL, Owens says the league needs leadership.

“I would have loved to have been asked how to run the (New York) Jets, because at 20 years old you are a know it all.

“The NFL needs to step up to the plate, recognize what’s going to work for this country. And pride in country, flag, and culture is the bottom line.”

He also had a message for young men.

“If you want to run a business, and be successful, you need to protect (country, flag, and culture). Young people don’t understand that until they get out into the world. Young men need to recognize how proud we should be of that flag.”

Asked about National Football League commissioner Roger Goodell, Owens said that he needed to listen to the President.

“We have a president who has been a builder. He’s built empires. He’s understood how to make business happen. He’s had a vision….Get back to where our country, our young men and women, respect the flag. Do that again, and the NFL might just come back to be the great institution that we all grew up with and were proud to be a part of. They need to do something different.”

The NFL has suffered dismal ratings in 2017, with fans tuning out in response to the league wide anthem protests that have plagued the sport all season.  Owens played ten seasons in the NFL and is the author of “Liberalism or How to Turn Good Men into Whiners, Weenies and Wimps.”