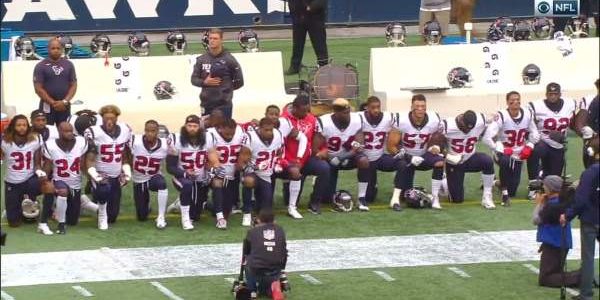 Some NFL owners believe there is a strong possibility they will enact an offseason change to the league’s national anthem policy if players’ protests during the anthem persist through the end of this season, reverting to a previous approach of keeping players in the locker room while the anthem is played, according to several people familiar with the league’s inner workings. “I think that if players are still kneeling at the end of the year, then it could very well happen,” said one person familiar with the owners’ deliberations on anthem-related issues.

That person said it was “too early to tell” for certain if the change to the anthem policy will be made by owners and the league. The person was “not sure” if a formal vote of the owners would be required to enact such a change but said, “I think most owners would support it, particularly if players continue to kneel this season.”

Those sentiments were echoed by several others with knowledge of the owners’ thinking on the matter. They said they did not know at this point exactly how many owners would favor such an approach, and they cautioned that there have been no detailed discussions yet about leaving teams and players in the locker room for the anthem because owners did not consider it appropriate to make an in-season change to the policy. But they agreed that if the protests last all season and remain intensely controversial among fans, the issue will be raised during the offseason and a policy change to having players remain in the locker room until the anthem’s conclusion would have the support of a significant number of owners. They said the matter could be addressed at the annual league meeting in March.

The change to having players and coaches on the sideline for the anthem was made in 2009. The current league policy says that players must be on the sideline for the anthem. It suggests but does not require that players stand for the anthem. At various points this season some players, including full teams, have remained off the field during the playing of the anthem. They have not been fined or otherwise disciplined by the NFL. The league has been under intense pressure from President Trump and some fans to require players to stand during the anthem. In September, Trump said during a campaign speech in Alabama that owners should fire any player who protested during the anthem. His fiery speech included a reference to such a player being a “son of a bitch,” and it fueled an intense national controversy over the issue.

The pressure from the White House has not relented. After Oakland Raiders running back Marshawn Lynch refused to stand for the U.S. anthem before Sunday’s game against the New England Patriots in Mexico City, Trump offered critical comments Monday on Twitter. “Marshawn Lynch of the NFL’s Oakland Raiders stands for the Mexican Anthem and sits down to boos for our national anthem,” Trump wrote. “Great disrespect! Next time NFL should suspend him for remainder of season. Attendance and ratings way down.”

Goodell and owners said then that they were focused on discussions with the players about league support of players’ community activism. They said they hoped that such support would convince players to voluntarily stand for the anthem, although they cautioned there was no formal or implied agreement that NFL support of players’ activism would lead to all players standing. “This is not a trade-off,” Jed York, the chief executive officer of the San Francisco 49ers, said at the October meeting. “From what I’ve read, there are some players that have said that they’re still not considering standing yet. And that never came up in the meeting. … This has been, ‘How do we take protest to progress?’ How do we make sure that we move these issues forward that matter to the players and I think that matter to the owners?”