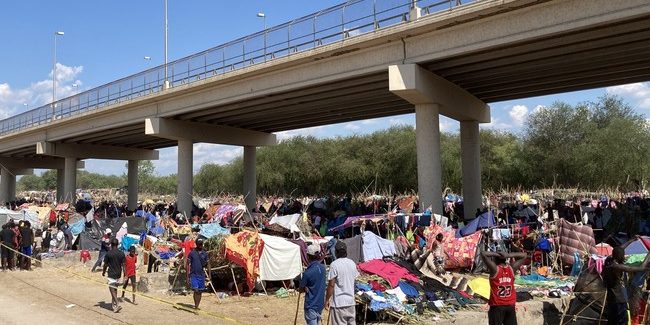 DEL RIO, Texas — Mayor Bruno Lozano has been trying to get President Joe Biden’s attention on Twitter as the commander in chief spent the weekend in Rehoboth Beach while Del Rio remained overwhelmed with a giant surge of illegal immigrants.

Lozano, a Democrat, has been tagging Biden and Vice President Kamala Harris in tweets on his personal Twitter account.

At a press conference on Sunday, Lozano told Townhall while he was able to speak with Department of Homeland Security Secretary Alejandro Mayorkas, he still had not heard directly from either Biden or Harris.

“I just feel that the White House definitely needs to address, and address the situation in real-time, and let the American people know what’s happening at their southern border.”

The surge, which started last week, put the national spotlight back on the ongoing crisis at the U.S.-Mexico border. What made the situation in Del Rio unique was how at least 15,000 people, mostly Haitians, crossed into Texas from Mexico in a short amount of time, severely straining the resources of the Border Patrol’s Del Rio Sector and local law enforcement. This resulted in the setup of a massive makeshift camp under the international bridge while the immigrants waited to be processed.

As of Sunday afternoon, there were still around 12,000 illegal immigrants under the international bridge, though DHS had officially started deportation flights to Haiti. Few people had tents, many resorted to building shelters out of branches and stalks of grass.

Initially, the makeshift camp had 20 porta-potties for 4,000 people. The number increased to 60 porta-potties, but so had the number of the migrants, according to National Border Patrol Council Local 2366 President Jon Anfinsen. The downwind smell of the porta-potties was very strong. As word began to spread about the deportation flights among the Haitians, many began to voice frustration and begged to not be sent back to Haiti. There was also some confusion among the illegal immigrants as they told Townhall they were being prevented from going back into Mexico by U.S. law enforcement, but Border Patrol agents said no one was preventing them from crossing back.

While single adults will be expelled under Title 42, Border Patrol Chief Raul Ortiz said family units will be processed to be released into the U.S. with a notice to appear for an asylum court hearing.

NEW: U.S. Border Patrol Chief Raul Ortiz says there are currently 12,600 migrants under the bridge in Del Rio. Told me single adult men will be expelled via Title 42, but most family units will be processed and released into US w/ NTA (notice to appear). @FoxNews pic.twitter.com/JhaS3YB4pX

In response to the surge in illegal crossings, the U.S. closed Del Rio’s official port of entry, which resulted in hotels and restaurants being understaffed since some workers live across the Rio Grande in Ciudad Acuña. Illegal crossings have almost come to a complete halt in the area around the international bridge after Gov. Greg Abbott (R) and DHS sent extra officers to Del Rio.