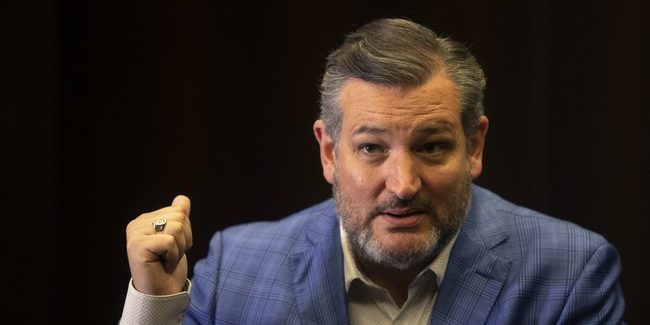 Sen. Ted Cruz is on the ground in Del Rio, Texas, detailing the humanitarian crisis under the Del Rio International Bridge, where there are more than 10,000 illegal immigrants packed together. The Texas Republican called the situation a “direct result” of the Biden administration’s “open borders policy”

“This is a crisis that is unfolding. It’s a manmade crisis,” he said in a video, standing under the bridge. “Just over a week ago there were fewer than 1,000 people here under the bridge. Averaging between 700-1000. Then, on Sept. 8, the Biden administration made a decision to cancel deportation flights back to Haiti, the vast majority of these illegal immigrants crossing in Del Rio were from Haiti. When they made that decision eight days ago 700-1000 people here discovered they could stay. They pulled out their cellphones and called their friends, they called their family and eight days later 700 people became 10,503 people. This is a disaster and it is a manmade disaster. It is a result of political decisions and Joe Biden could end this tomorrow by simply following the law and reinstating deportation flights back.”

Cruz, who said the situation is beyond what Border Patrol can handle, continued: “This is wrong. This is not humane, this is not compassionate. This is lawless and it is inviting suffering. This needs to end.”

Cruz’s footage comes as the Federal Aviation Administration put a temporary flight restriction in place so that Fox News could no longer use its drone to report on the crisis.

Responding to the FAA’s decision, Cruz said he’s “never seen anything like that.”

“The drone footage started this morning and people across the country were horrified and I guess the political operatives at the White House saw that and decided the last thing they want is Fox News actually reporting on what’s happening down here so now the FAA is saying ‘please, no journalists allowed.'”

He went on to call the crisis under the bridge “the most horrific thing I’ve ever seen.”