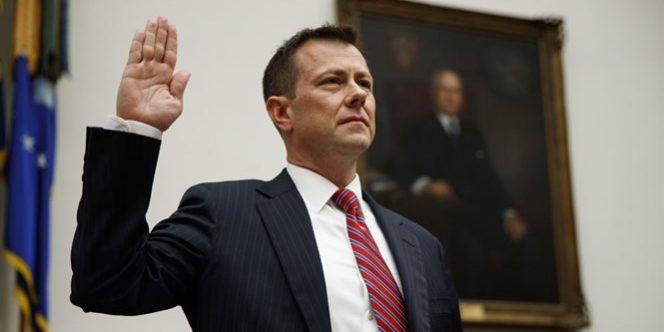 Well, for those of you wondering how disgraced FBI Agent Peter Strzok is still employed with the bureau, you don’t have to ask yourselves any longer. The FBI fired him over his anti-Trump texts.

The FBI has fired Agent Peter Strzok, who helped lead the bureau’s investigation into Russian interference in the 2016 election until officials discovered he had been sending anti-Trump texts.

Aitan Goelman, Strzok’s lawyer, said FBI Deputy Director David L. Bowdich ordered the firing on Friday — even though the director of the FBI office that normally handles employee discipline had decided Strzok should face only a demotion and 60-day suspension. Goelman said the move undercuts the FBI’s repeated assurances that Strzok would be afforded the normal disciplinary process.

“This isn’t the normal process in any way more than name,” Goelman said.

The termination marks a remarkable downfall for Strzok, a 22-year veteran of the bureau who investigated Russian spies, defense officials accused of selling secrets to China and myriad other important cases. In the twilight of his career, Strzok was integral to two of the bureau’s most high-profile investigations: the Russia case, and the investigation into Hillary Clinton’s use of a private email server while secretary of state.

Strzok was a top counterintelligence agent at the FBI, who was a point person for the Hillary Clinton email probe and the bureau’s investigation into possible collusion between the Kremlin and the Trump campaign in 2016. Throughout these investigations, he was having an extramarital affair with former FBI lawyer Lisa Page, with whom he exchanged tens of thousands of texts—which were anti-Trump, pro-Hillary, and has casted doubt on the integrity on two of the most sensitive federal investigations in recent memory. In one exchange, Strzok and Page worried that the FBI was going too hard on Hillary in the email investigation. He was reportedly shown possible evidence that Clinton’s unauthorized and unsecure server was breached; he did nothing about it.