‘Does It Feel Closed?’: Harris Faulkner Brings the Heat Against Biden Admin as Border Crossings Continue 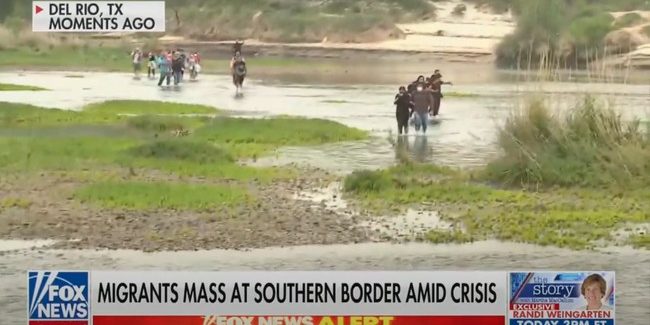 Fox News host Harris Faulkner laid into the Biden administration on Monday for claiming the border is closed and not open when their cameras at the border show the complete opposite.

Fox News national correspondent Bill Melugin was live on the scene in Del Rio, Texas, as he showed large groups of illegal immigrants crossing the Rio Grande from Mexico into the United States. Melugin said it is a scene that has played out repeatedly during his short time in that area of the border.

“The Biden administration insists that the border is closed. Does it feel closed to you? Is this what it looks like? Look at the stream of migrants crossing the Rio Grande river and this is ongoing,” Faulkner said to Melugin. “This is the largest group we’ve seen so far, a group of 52 migrants that just crossed the Rio Grande. You were just showing the video a few moments ago. Almost all of them are Venezuelans. Yes, Border Patrol is here now along with local sheriff’s deputies and state troopers. But again the biggest group we’ve seen do this the third day in a row. This has been happening every morning we’ve been out here in Del Rio,” Melugin said.

One of the reasons why Del Rio is such a hotspot for illegal crossings into the United States is due to the Rio Grande being very shallow at that point, lessening the chance of someone getting caught in the current and being swept away as the river’s current is infamously strong in other areas.

Despite the Biden administration’s assurances the border is “closed” U.S. Custom and Border Protection apprehension numbers have reached all-time highs, with CBP apprehending over 172,000 people in March.  April’s apprehension numbers are expected to be similarly high.