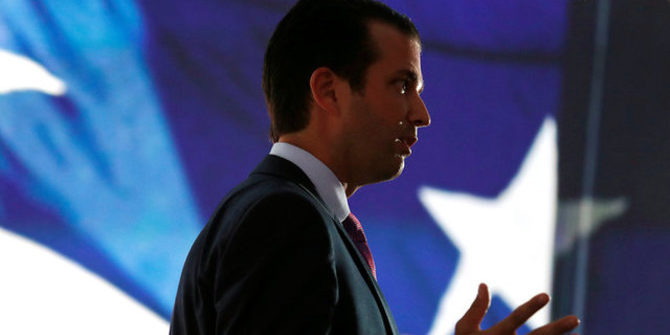 Donald Trump Jr. on Tuesday released what he said was the “entire email chain” of his conversations setting up a disputed meeting with a Russian attorney, showing what appeared to be an offer to provide information that would “incriminate” Democratic presidential candidate Hillary Clinton as “part of Russia and its government’s support for Mr. Trump.” The president’s eldest son seemed to readily accept the offer, according to the messages. “My son is a high-profile person and I applaud his transparency,” President Trump said in a statement issued later on Tuesday.

The email chain — purported to be between Trump Jr. and publicist Rob Goldstone — occurred in June 2016. Goldstone went on to set up the controversial June 9 meeting with Russian lawyer Natalia Veselnitskaya, whom he identified in the emails at one point as “The Russian government attorney who is flying over from Moscow.”

“The Crown prosecutor of Russia met with his father Aras this morning and in their meeting offered to provide the Trump campaign with some official documents and information that would incriminate Hillary and her dealings with Russia and would be very useful to your father,” an email identified as being from Goldstone said. It was the first email in the chain released by Trump Jr., who helped during his father’s presidential campaign but is not part of his White House staff. “This is obviously very high level and sensitive information but is part of Russia and its government’s support for Mr. Trump — helped along by Aras and Emin.”

Trump Jr. said in a statement on Tuesday he knew “Emin” from helping to organize the 2013 Miss Universe pageant in Russia. That person appears to be Emin Agalarov, whose father, Aras Agalarov, is a billionaire with reported ties to Russian President Vladimir Putin. Trump Jr. replied in the email chain: “Seems we have some time and if it’s what you say I love it especially later in the summer.” Veselnitskaya has since denied in an interview with NBC having “any damaging or sensitive information about Hillary Clinton.”

“It was never my intention to have that,” she said. Donald Trump Jr. also has denied any wrongdoing occurred in the meeting, which also included then-campaign chairman Paul Manafort and Jared Kushner, President Trump’s son-in-law and senior aide.  “The information they suggested they had about Hillary Clinton I thought was Political Opposition Research,” Trump Jr. said in the Tuesday statement. “I first wanted to just have a phone call but when they didn’t work out, they said the woman would be in New York and asked if I would meet. I decided to take the meeting…As Rob Goldstone said just today in the press, the entire meeting was ‘the most insane nonsense I ever heard. And I was actually agitated by it.'” The New York Times on Twitter said Trump Jr. only tweeted images of the emails after “he was told NYT was about to publish the contents of the emails.”

The email disclosure is likely to embolden critics of President Trump and those attempting to link his campaign to alleged collusion with Russian officials. Even before the Trump Jr. emails became public, House Minority Leader Nancy Pelosi, D-Calif., blasted the Trump administration.

“There’s no escaping it: the Trump Campaign’s inner circle met with an agent of a hostile foreign power to influence the outcome of an American election,” Pelosi said in a Tuesday statement. “The American people face a White House riddled with shadowy Russian connections and desperate to hide the truth.”

Rep. Elijah Cummings, D-Md., also hit Trump Jr. for the email chain. “The email chain confirms that the President’s son was both aware of and supported the Russian government’s efforts to help the President get elected,” Cummings said in a statement.

President Trump, via his outside legal representation, has denied knowing about or attending the meeting. A spokesman for Vice President Pence also issued a statement distancing Pence from the mushrooming affair. “The Vice President was not aware of the meeting,” Vice Presidential Press Secretary Marc Lotter said. “He is not focused on stories about the campaign, particularly stories about the time before he joined the ticket.” In the initial June 3 email, Goldstone wrote that he could “also send this info to your father via [his assistant] but it is ultra sensitive so wanted to send to you first.” Most of the rest of the email chain is scheduling minutiae, with Trump trying to arrange a phone call and then working out a suitable meeting time with Goldstone’s contact.

There is nothing contained in the emails to suggest Trump Jr. was informed of the larger alleged Russian effort to meddle in the U.S. presidential election.