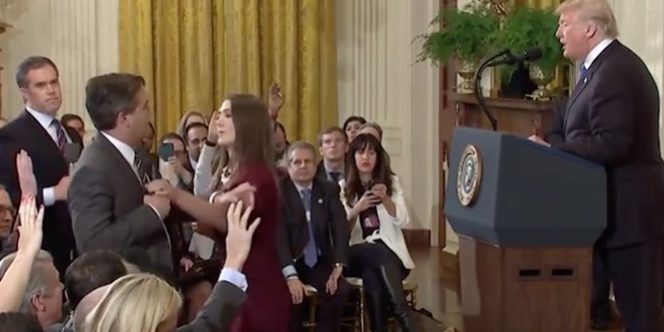 Dear diary, my name is Jim Acosta; I’m suing the Trump White House for yanking my press pass fate being towel slapped by the president for the 3095thtime. Yeah, this fight isn’t over. It began on Wednesday when President Trump delivered a lengthy press conference after the 2018 elections. He then opened it up for questions. Of course, CNN’s Jim Acosta raised his hand. After his questioning turned into a debate over the word “invasion,” which the president has used to describe the illegal alien horde approaching the southern border, Trump had enough.

“I think you should let me run the country, you run CNN…Put down the mic,” said Trump. “CNN should be ashamed of itself having you working for them. You are a rude, terrible person; you shouldn’t be working for CNN.”

Oh, what a smack down. Later that night, his press pass was revoked. The Hill’s Joe Concha described Acosta perfectly; he’s not a serious reporter, but a middle-aged member of a high school debate team—who sucks in that imaginary role as well.

Well, now, there’s talk of Acosta and CNN suing the Trump White House (via The Hill):

Donaldson, speaking on CNN’s “Reliable Sources,” said that he has been asked to submit an affidavit in the lawsuit in preparation for a court hearing this week.

A CNN spokesperson told The Hill that “no decisions have been made.”

“We have reached out to the White House and gotten no response,” the spokesperson said.

The possible lawsuit comes amid increasingly heated tensions between Trump and the press. In addition to the back-and-forth with Acosta, Trump has clashed with other reporters, and suggested he may pull other press credentials.

The Trump White House also took heat for allegedly releasing a doctored video of Acosta striking a White House aide. The publication added that Kellyanne Conway, special counselor to the president, admitted that the video was sped up, but that in no way constitutes altering the footage. Acosta did refuse to give up the microphone, and some in liberal circles, like The View’s Sunny Hostin, think that the aide is the one who assaulted Acosta. It’s insane, but when it comes to a fight between CNN and the Trump White House: bring your popcorn. Then again, when it comes to these showdowns, let’s not forget that a) they would never do this to a Democratic president; b) they never committed any of these antics under Obama, even when he did lie to them; c) we have another example of straight up hatred from the press towards Trump. As Michael Goodwin noted in an op-ed for the NY Post, Acosta violated journalism’s oldest rule, and we should be reminded that White House press credentials are not a “universal right”.

He [Acosta] too just wanted to make an accusation and argue. On camera.

There was a time not long ago when young journalists were taught not to become the story. Apparently, many news organizations have flipped that lesson on its head.

But we are witnessing something more insidious here than media trash talk. Plain and simple, we are watching expressions of personal hatred.

They hate Trump. They really, really hate him. There’s nothing professional about it.

Or try to imagine Acosta and his ilk behaving in similarly hostile fashion toward Barack Obama or Hillary Clinton. Keep trying, but you can’t imagine it because it never happened. Both of those pols lied to journalists repeatedly, yet you can bet 90 percent still voted straight Democratic.

Even if they didn’t like Obama or Clinton, the political reporters would never dare accuse them publicly of anything, argue with them or interrupt them. Even when skeptical, they were respectful.

Recall how Obama used to spend 10, 15 and even 20 minutes answering a single question — without interruption.

Many in the press corps may have found him overbearingly arrogant. They may have resented the way he looked down on them and bristled at critical stories or tough questions. They knew he started more leak investigations than any other president, and might have feared him because his Justice Department wiretapped a Fox News reporter during a leak case.

But they would never interrupt him or insult him or refuse to give up the microphone.

White House press credentials are not a universal right. There are implicit expectations of proper behavior, and the White House decision to suspend Acosta’s credential is warranted.

Just as Acosta can’t go into a movie theater and yell “Fire” when there is no fire, he should not have the right to hijack a presidential press conference to suit his own ego.