DOUBLING DOWN: Joe Biden Peddles Administration’s Talking Points on Not Seeing a Recession 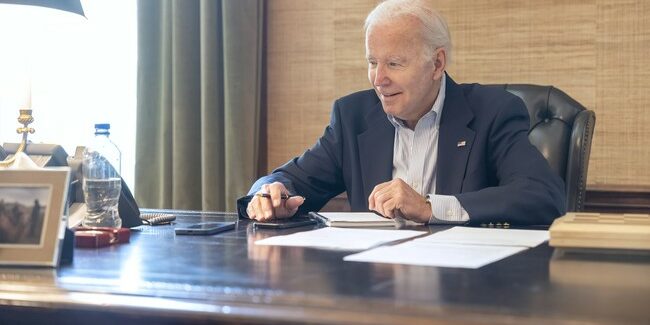 On Monday afternoon, President Joe Biden took questions from the press, including from Fox News’ Peter Doocy, in pointing out that GDP numbers will be coming in on Thursday, asked “how worried should Americans be that we could be in a recession.” With a smile on his face as Doocy asked his question, Biden doubled down on his administration’s talking points by claiming he doesn’t think we will be in a recession.

“We’re not gonna be in a recession in my way,” Biden claimed. “We, uh, the unemployment rate is still one of the lowest we’ve had in human history, it’s in the 3.6 [percent] area, uh, we still find ourselves with people investing. Uh, my hope is that we go from this rapid growth to a steady growth, and, uh, so we’ll see some coming down. But I don’t think we’re going to, uh, God willing, I don’t think we’re going to see a recession.”

This has been a consistent narrative from the White House, as it has sought to change the definition of what a recession is, which is typically thought of as two quarters of negative GDP growth.

Last Sunday, Jared Bernstein, who is a member of the White House Council of Economic Advisers, dismissed the usually thought of definition when speaking with Shannon Bream on “Fox News Sunday.” Later that week, he and Cecile Rouse, who chairs the council, promoted a different definition in a blog post published to the White House website.

As Guy highlighted, Treasury Secretary Janet Yellen also appeared on NBC’s “Meet the Press” on Sunday to tell host Chuck Todd that “this is not an economy that is in recession.” She even claimed that “you don’t see any of the signs,” though a poll last month from the Wall Street Journal surveying economists indicated a recession is likely, and the Atlanta Fed’s quarterly GDP prediction has also raised concerns.

The White House published a partial transcript of Yellen’s appearance on the show, with a note that her appearance “Debunks misperception that it is exclusively based on GDP, points to historically strong labor market and solid consumer spending.” This is in stark contrast to insight from Larry Summers, who held Yellen’s position under President Bill Clinton and who served as an economic adviser to President Barack Obama. Summers, it’s worth reminding, predicted that the COVID stimulus package would lead to inflation, which it did, though his warnings went unheeded by the gaslighting Biden administration.

Another adviser, Brian Deese, as Matt highlighted on Monday, also sought to go with a different definition during his appearance on CNN earlier in the day.

This administration has consistently been gaslighting on their handling of the economy, which Biden has particularly low marks on for his handling. When asked about it, White House Press Secretary Karine Jean-Pierre tends to claim that we have a “strong” economy and that we are “stronger economically than we have been in history,” with the president’s Twitter account also making such claims.

“#recession” has been trending on Twitter for Monday as a result of the Biden administration’s narrative.