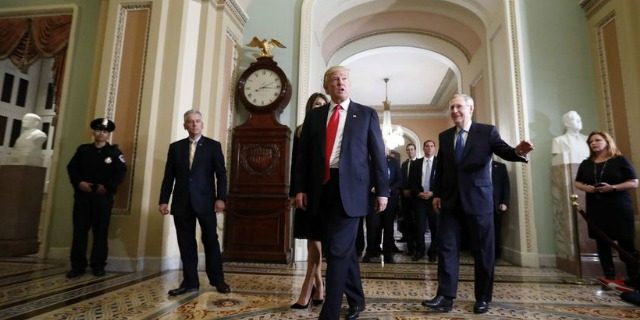 Incoming White House press secretary Sean Spicer, in an exclusive interview with Breitbart News, detailed how President-elect Donald J. Trump’s administration will be ready to go on day one thanks to a “dream team” cabinet and a largely unprecedented transition process that has flowed smoothly.

The cabinet, Spicer argued, is not only filled with talented people of “quality and caliber” that Democrats can’t legitimately oppose, but, he said, it is the “most talented cabinet in modern history.”

“I think not only are we ahead of schedule, which is historically important, but I think number two if you look at the quality of these individuals, the Democrats are basically trying to figure out how they can oppose these folks and they’re coming up empty because of the quality and caliber of each of these individuals,” Spicer said in a phone interview. “When you look at them, they might not agree with them, but they have to admit these are some very successful people in their various fields. And they’re probably, when you rate this cabinet overall, there’s no question it’s by far holistically the most talented cabinet in modern history.” Spicer said the cabinet Trump has assembled, from Sen. Jeff Sessions (R-AL) as Attorney General to Gen. John Kelly as Homeland Security Secretary to Gen. James “Mad Dog” Mattis at the Pentagon to Dr. Ben Carson at Housing and Urban Development (HUD), and more, is a “dream team.”

“In Department after Department, you are literally getting the Dream Team of a cabinet,” Spicer said.

Republicans on Capitol Hill have put together an aggressive hearing and confirmation schedule in the U.S. Senate for Trump’s nominees. Sessions is up first, with hearings before the Senate Judiciary Committee on Tuesday and Wednesday this week, and then Kelly, who will have his hearings on Tuesday afternoon. Exxon Mobil CEO Rex Tillerson, Trump’s pick to lead the State Department, will testify before the Senate Foreign Relations Committee on Wednesday morning running simultaneously with hearings to confirm Rep. Mike Pompeo (R-KS), Trump’s CIA director pick, and incoming Transportation Secretary Elaine Chao. Thursday will see hearings for Mattis, Carson, and billionaire Wilbur Ross—Trump’s incoming Commerce Secretary—with hearings for his Labor Secretary Andy Puzder, a fast food executive, tentatively set for early next week. At a media briefing on Monday in Washington, Spicer told reporters that for each of these officials who have hearings this week their paperwork has already been submitted to the proper vetting entities, such as the Office of Government Ethics (OGE), and is expected to be cleared in short order. Michigan’s Betsy DeVos—Trump’s nominee to run the Department of Education—is scheduled for January 17. Hearings have yet to be set for incoming Treasury Secretary Steven Mnuchin, a Goldman Sachs executive; incoming Energy Secretary and former Texas Gov. Rick Perry; incoming Health and Human Services Secretary Rep. Tom Price (R-GA); and incoming Interior Secretary Rep. Ryan Zinke (R-MT), a decorated Navy SEAL Commander before his career in politics — but those hearings are expected soon. Trump has not yet selected an Agriculture Secretary or a Veterans Affairs Secretary, but is expected to make those selections shortly. Hearings and confirmation is expected soon, as well, for cabinet-level administration slots such as the Environmental Protection Agency (EPA) administrator position, which will go to Oklahoma Attorney General Scott Pruitt; for incoming Office of Management and Budget (OMB) director Rep. Mick Mulvaney (R-SC), incoming United Nations Ambassador and outgoing South Carolina Gov. Nikki Haley, incoming Small Business Administration administrator Linda McMahon, and incoming U.S. trade representative Robert Lighthizer.

“Then there’s the logistical side, and I think that from a logistics standpoint, this transition is firing on all cylinders,” Spicer continued in his exclusive interview with Breitbart News. He continued:

When you think about it, the way we have set it up we have over 300 people on these landing teams across the agencies to make sure that literally on day one it’s the end of business as usual and immediate change comes to Washington across the entire government. But the other thing is, the process itself of preparing the government and preparing the nominees, we have probably had the most comprehensive process to make sure that our nominees for every office are prepared and are able to implement change on day one. There is a team around each one of these folks to make sure they are ready to go.

Around each of these people, as they’ve been selected, has been a “Sherpa team” helping them prepare for the confirmation process and getting them ready to go through U.S. Senate hearings and get started as soon as they are confirmed. Previous administrations have used Sherpa teams, but Spicer told Breitbart News a new development—one of many “firsts” for the Trump transition that no previous administration transition has used—is that they include media preparedness to be ready to answer questions the media may have for them. The Sherpa teams also include legislative, policy, and other officials to help the cabinet and cabinet-level nominees prepare for Senate hearings and for governing the minute they are confirmed. Spicer went on to say:

I’ll give you an example of this, and this comes from what I call the ‘firsts.’ When we set up the Sherpa teams, it’s a team of when someone gets nominated, already in place is a Sherpa team. It’s literally a team that is ready to go when the person is nominated, or chosen, because even before it’s official we’re ready to get around them. There’s a team leader, there’s somebody working the legislative side, somebody who’s working the policy side, the logistics, and then there’s a media person—and then each one of those people has a team that they work with. So in other words, it’s not just one person getting it—there’s a team in each one of those buckets so that there’s somebody to answer the media questions, to prepare them for questions to come up, somebody to prepare them for their legislative visits and meetings, there’s somebody making sure all their paperwork is ready to go and filed and gathered up because it’s a pretty laborious process. The reason each one of these things is going smoothly is because we’ve got all of the systems in place and the transition team has done just a phenomenal job and they were ready to go with all these Sherpa teams and there was planning that has been getting done so that when we had nominees in place that all of this could be executed flawlessly.

Another first, Spicer noted, is that Trump will be the first Republican president since 1929, with the Herbert Hoover administration, to come into office with a combination of a GOP majority in both chambers of Congress, a majority of GOP governorships nationwide, and a Supreme Court vacancy to fill. Trump is expected to make his Supreme Court justice selection to replace the late Antonin Scalia shortly after the inauguration, but this combination—a GOP controlled Congress, GOP control in the states, the ability to make an immediate appointment to the Supreme Court—means Trump will make his mark on history quickly.

This is also the first presidential transition officially run out of an institutionalized General Services Administration (GSA) facility, something all future transitions will follow; but Spicer notes that the Trump team is “blazing the trail” on this front. Add all of that to the new way to solicit talent for federal jobs through GreatAgain.gov, and social media involvement in this transition, run by Dan Scavino, Trump’s Social Media Director—and this transition is unlike any other in history. It is expected that shortly after these committee hearings, this week and in the coming weeks, the Republican-led panels will confirm the various nominees to send them to a vote before the full GOP-controlled U.S. Senate for confirmation. There, it is expected, every single one of Trump’s cabinet nominees will be easily confirmed and most should receive wide bipartisan support, Spicer and other officials say. Confirmation votes are likely to happen quickly in the coming weeks, perhaps as soon as Inauguration Day—January 20—as Republicans helped to do when now-outgoing President Barack Obama was taking office in 2009. In fact, a whopping seven cabinet officials were confirmed on Jan. 20, 2009—Obama’s Inauguration Day—and five more were confirmed by the end of the first week of his presidency. In all, 13 of Obama’s nominees for cabinet slots were confirmed by voice vote—and Republicans have made clear they fully expect Democrats to agree to these same terms for Trump. It is not as if Democrats can do much to stop them. With GOP control of the Senate, and Democrats having enacted the nuclear option when they were in the majority, a simple majority of 51 votes—which can be achieved with Republicans alone every time if needed, despite the fact that Trump’s nominees are expected to receive bipartisan support across the board—is all that is needed to confirm them. That reality isn’t stopping Democrats such as Senate Minority Leader Chuck Schumer from playing politics with the matter, as he posted a nasty message at Senate Majority Leader Mitch McConnell on Facebook Monday. But Republicans expect the political gamesmanship will end soon so the federal government can focus on getting Americans back to work and dealing with the many problems this great nation faces.

“It’s like anything else, I think that the sooner that you’re ready to go the sooner you can actually execute,” Spicer explained, noting how important it is the full government be ready as soon as possible. “So if you get hired on day one, you bring on a new employee at Breitbart, you say ‘okay, on Friday you come get your computer and next Monday get your ID,’ and you’re like ‘I’m ready to go,’ so the more that we can logistically get the nominees in a position to be ready to execute an agenda of change the quicker it all starts to happen.” This smooth transition process, Spicer said, wouldn’t be possible without Trump’s businessman-like approach at the top. It’s his management style, Spicer said, that has led to this peaceful, quick, and effective transition from the Obama administration to the incoming Trump administration. “It’s all driven by it [Trump’s style of management],” Spicer said. “If you know that this is the kind of process that he’s going to demand, then you instinctively start to act that way. You know that he’s going to have an expectation that things are going to get done in a manner like that. The people that are in charge proactively started to think ahead to make sure this is done, because this is going to be expected of us.”