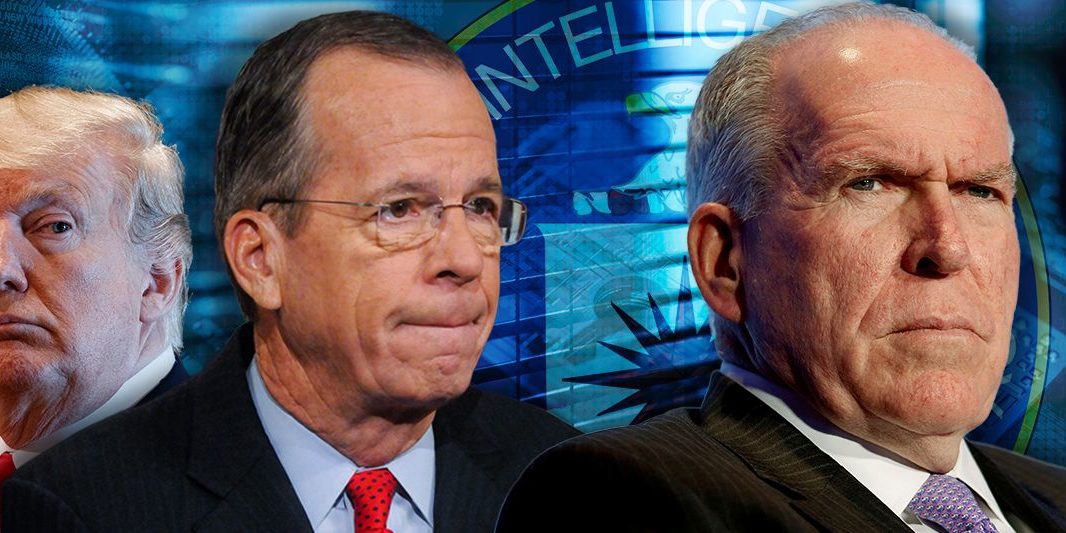 “I think John’s an extraordinary servant of the country, but I think he has been incredibly critical of the president, and I think that has put him in a political place which actually does more damage for the intelligence community — which is apolitical,” Mullen said. Brennan had publicly accused President Trump of “treason” after his summit with Russian President Vladimir Putin this summer in Helsinki, Finland, and he has repeatedly lambasted Trump with Twitter posts that critics have charged improperly hint at classified insider information about the ongoing Russia probe. However, Mullen added, Trump’s decision to revoke Brennan’s security clearance last week raised significant concerns.

“For someone of my age, it brings back the whole concept of the ‘enemies list’ under President Nixon,” Mullen continued. “And even before that, in the early 1950s, the McCarthy era — where the administration starts putting together lists of individuals who don’t agree with them.”

The White House announced Wednesday that President Trump had revoked Brennan’s security clearance, in the first decision to come from a review of access for several top Obama-era intelligence and law enforcement officials. White House Press Secretary Sarah Sanders read a statement on behalf of the president during the start of the press briefing, saying Brennan “has a history that calls his credibility into question.” Specifically, the president’s statement criticized Brennan for falsely telling Congress that the CIA had not infiltrated Senate computers, and for claiming that the unverified Steele dossier was not a factor in 2016 intelligence assessments.

The statement also claimed Brennan had been “leveraging” the clearance to make “wild outbursts” and claims against the Trump administration in the media. Also speaking to “Fox News Sunday,” Senate Homeland Security Committee chairman Ron Johnson, R-Wis., criticized Brennan’s political comments, but suggested an alternative to yanking his clearance.

“John Brennan really did cross the line. He’s one of the leaders of the resistance movement. … I understand President Trump’s frustration,” Johnson said, noting that Brennan began harshly criticizing the president as soon as he took office.

He added that former officials with security clearances aren’t automatically entitled to view classified information. “The best way of handling this, in any administration, is: If you don’t want to consult with somebody, you don’t necessarily have to yank their security clearance,” Johnson said. “Just don’t give them access to the classified material.” Trump on Saturday took aim again at Brennan, calling him a “political hack” who “cannot be trusted” with national secrets.

“Has anyone looked at the mistakes that John Brennan made while serving as CIA Director? He will go down as easily the WORST in history & since getting out, he has become nothing less than a loudmouth, partisan, political hack who cannot be trusted with the secrets to our country!” he tweeted. For his part, Brennan declared the move to take away his clearance “part of a broader effort by Mr. Trump to suppress freedom of speech & punish critics.”

On Sunday, Brennan denied that he has improperly traded on his access to classified information to trash Trump, telling NBC’s “Meet the Press” that “I don’t believe I’m being political at all.”

Brennan also suggested he might take legal action against the president. “If my clearances and my reputation as I’m being pulled through the mud now — if that’s the price we’re going to pay to prevent Donald Trump from doing this against other people, to me it’s a small price to pay,” Brennan said. “I’m going to do whatever I can personally to try to prevent these abuses in the future, and if it means going to court, I will do that.”

One critic of Trump’s decision, former CIA Director Michael Hayden, told CNN on Sunday that the relationship between Trump and the intelligence community was “dangerously close to being permanently broken; it is badly injured right now.”

Hayden also suggested he’d be “honored” to lose his security clearance as well, in response to a question from host Jake Tapper. “Well, to be included in that group? Sure,” Hayden said. “And frankly, if his not revoking my clearance gave the impression that I somehow moved my commentary in a direction more acceptable to the White House, I would find that very disappointing and frankly unacceptable.” But speaking on CNN’s “State of the Union,” former Director of National Intelligence James Clapper, another critic of Trump’s decision, acknowledged that Brennan’s unfettered comments had become an “issue.”

“John and his rhetoric have become an issue in and of itself,” Clapper said Sunday. “John is sort of like a freight train, and he’s going to say what’s on his mind.”

The parade of ex-CIA officials on the Sunday morning shows continued on CBS’ “Face the Nation,” where former CIA Director Leon Panetta claimed Trump may not have had the legal authority to terminate Brennan’s clearance unilaterally. “I think there are questions raised as to whether or not this president has followed the executive order, and whether or not he’s provided due process to those that are going to have their security clearances revoked,” Panetta said, referring to Executive Order 12968. The order establishes procedures for revoking security clearances.