Feinstein Denies That Her Office Leaked Ford’s Letter, Says It Must Have Been Ford’s Friends 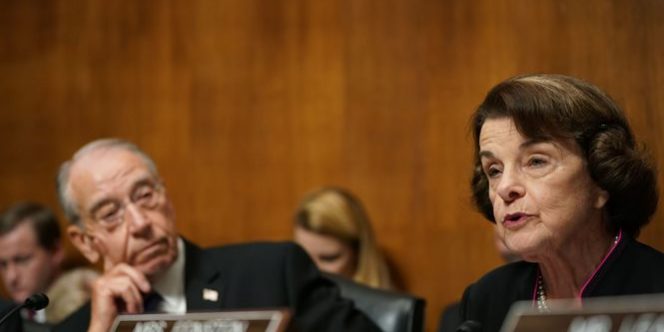 Sen. Dianne Feinstein (D-CA) denied leaking a letter, sent to her office by Dr. Christine Blasey Ford, accusing Supreme Court nominee Judge Brett Kavanaugh of sexual assault. Ford had asked that the allegations remain confidential. Feinstein theorized that Ford’s friends may have leaked the story and that is how the allegations became public.

Ford, who claims that Kavanaugh groped her and pinned her down while he was drunk at a party in high school, mentioned in her testimony earlier Thursday that she had spoken to friends about the incident.

Sen. John Cornyn (R-TX) pressed Feinstein on whether or not her staff had leaked the letter.

“I don’t believe my staff would leak it,” she replied, but admitted that, “I have not asked that question directly, but I do not believe they would.”

She later clarified that “the answer is no.”

Cornyn asked if she had asked her staff.

“I just did,” she replied. “[Chief of Staff] Jennifer [Duck] reminds me I’ve asked her before about it, and that’s true.” Feinstein later said that one of Ford’s friends likely leaked the story to the press.

“It’s my understanding that her story was leaked before the letter became public,” Feinstein said. “She testified that she had spoken to her friends about it and it’s most likely that that’s how the story leaked and that she had been asked by press. But it did not leak from us, I assure you of that.” Ryan Grim from The Intercept, which had initially reported on the letter, confirmed that Feinstein’s office was not behind the leak.

Throughout the hearings Thursday, Senate Republicans criticized Feinstein’s handling of Ford’s allegations, saying she sat on the allegations until they could do the most harm to the confirmation process.

“If you wanted an FBI investigation, you could have come to us,” Sen. Lindsey Graham (R-SC) told Feinstein. “What you want to do is destroy this guy’s life, hold this seat open, and hope you win in 2020…This is the most unethical sham since I’ve been in politics, and if you really wanted to know the truth, you sure as hell wouldn’t have done what you’ve done to this guy.”