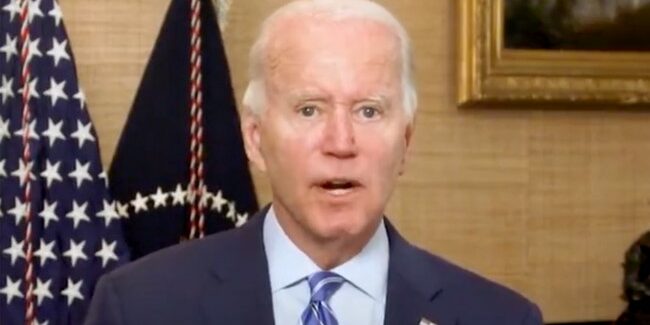 U.S. Gross Domestic Product declined .9 percent in the second quarter of 2022 according to the Bureau of Economic Analysis. Thursday’s report makes for the second consecutive quarter of negative GDP movement, after declining 1.6 percent in the first quarter, and makes the Biden recession official.

The Bureau of Economic Analysis reported that the decrease in real GDP “reflected decreases in private inventory investment, residential fixed investment, federal government spending, state and local government spending, and nonresidential fixed investment that were partly offset by increases in exports and personal consumption expenditures (PCE)” while [i]mports, which are a subtraction in the calculation of GDP, increased.”

As Townhall reported in April, initial data for Q1 showed GDP declining 1.4 percent, a negative read that was revised last month to an even greater contraction of -1.6 percent.

Data be damned, the Biden administration has launched a frenzied attempt to redefine the term “recession” and insists that a recession is not here while the president himself on Wednesday told Americans “we’re not going to be in a recession.”  Never mind, apparently, that Biden’s National Economic Council director Brian Deese stated in 2008 that “economists have a technical definition of recession, which is two consecutive quarters of negative growth.”

Biden, of course, has most of the mainstream media on his side to parrot the White House denials of a recession and attempted revisions of reality, but those attempts to invalidate what Americans are feeling haven’t been going well.

Meanwhile Congress, thanks to a reported deal with Senator Joe Manchin (D-WV), is still pressing ahead with legislation that would increase spending and raise taxes on Americans — more of the same economic chaos from Democrats that plunged the U.S. into an inflation crisis and triggered Fed interest rate hikes that have now led the country into a recession. Manchin has previously said that “I don’t think during a time of recession you mess with any of the taxes, or increase any taxes.”