Joe Manchin Is in Deep Denial 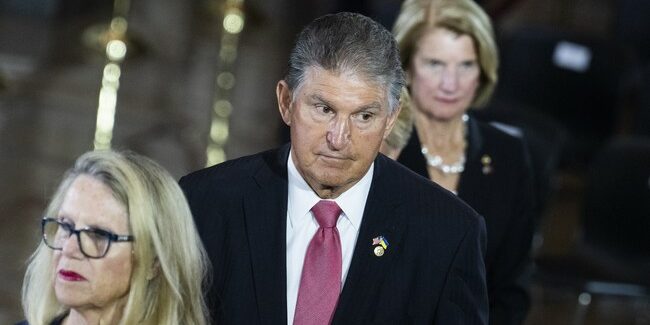 We wrote about this package last week, marveling that Democrats plan to raise spending in the middle of rampant inflation — and raise taxes in a recession.  But, as we noted, taxing, spending, and generally growing government is the raison d’etre of the Democratic Party — in addition to pushing this sort of extremism — so it stands to reason that they’d push one last time on this front, in advance of their grip on power likely slipping away.  The key figure behind the new proposal is West Virginia’s Sen. Joe Manchin, who’s torpedoed a number of his party’s dreams and aspirations during the Biden presidency.  This bill is his baby, crafted to meet with his approval, since he holds nearly all the leverage.  My bottom-line thoughts about the dynamic:

…Vote. Disempower his party. Also, there’s no use raging at him. His vote will still matter a lot for the foreseeable future. He’s helped hold the line on any number of horrible ideas, for which I’m still grateful. Hope obstacles tank this thing, but I’m guessing it gets done.

But let’s not gloss over how bad this bill is.  Bret Baier interviewed Manchin on Fox News Sunday, pressing him on a number of details, including independent analyses that counter Manchin’s top claims about the legislation.  What struck me about this whole exchange is how little substance Manchin offered in response to the data and evidence presented to him, which he broadly hand-waved away with empty ‘agree to disagree’ dismissals:

(1) Baier confronts Manchin with his own 2010 quote saying that in a recession, the government should not “mess with” or “increase” any taxes.  Manchin’s reply was not to push the embarrassing Democratic line that we aren’t in a recession (now being enforced in Orwellian fashion by “fact-checkers”). but rather he claims that his bill…doesn’t raise taxes.  This is just flatly, laughably false.  Not only does the legislation absolutely and indisputably raise taxes by hundreds of billions of dollars…

…it also violates Biden’s repeatedly-violated promise never to raise taxes on anyone earning less than $400,000 per year.  We’ve been exposing that lie throughout Biden’s candidacy and presidency, and here it is going down in flames yet again:

In addition to the tax hikes, the plan also massively empowers the IRS for a revenue-enhancing crackdown, in the form of an $80 billion infusion to the agency, funding an army of new auditors.  The rich can afford to pay talented people to shield their assets and handle audits.  Middle- and working-class people cannot, and they’ll bear some of the brunt of painful new audits, courtesy of a larger and more aggressive IRS.
(2) The Democrats’ name for their bill is the ‘inflation reduction act.’  Given their track record of inflation-increasing spending. and being dead wrong in inflation predictions, it’s pretty rich to see them run with this transparent manipulation.  Would it shock you to learn that a nonpartisan review of their new tax-and-spent bill finds that it would not, in fact, reduce inflation?

The Penn Wharton Budget Model (PWBM) released its preliminary estimates of the budgetary and macroeconomic effects of Democrats’ reckless tax-and-spending spree earlier today. The model, an initiative of the University of Pennsylvania, found that Democrats’ misnamed “Inflation Reduction Act” would actually increase inflation for the next two years. Here it is straight from the report: “We estimate that the Inflation Reduction Act will produce a very small increase in inflation for the first few years, up to 0.05 percent points in 2024.” … and the bill would “have no impact on GDP though 2031.” [Quote]: “We project no impact on GDP by 2031 and an increase in GDP of 0.2 percent by 2050. These estimates include the impact of debt and carbon reduction as well as capital and labor supply distortions from rising tax rates.”

An Americans for Tax Reform review reminds us of a 2021 Politico story reporting that Manchin himself has seen the Wharton modeling as particularly credible and influential.  Apparently not.  He’s ignoring it, now that it suits him to do so.

(3) The West Virginian effectively admits that he made a “mistake” when he predicted last year that his party’s $1.9 trillion COVID ‘rescue plan’ wouldn’t fuel inflation.  It very obviously did exactly that, as top Democratic economists have confirmed in stark terms.  He’s vowing not to repeat that mistake, insisting that the current bill does not represent “spending,” but rather an “investment” — and it’s about “bringing manufacturing jobs back to America.”  Well, here’s what the National Association of Manufacturers has to say about that:

The proposed “book tax” in the Senate’s reconciliation bill “would overwhelmingly hit U.S. manufacturers,” according to a new analysis by the Joint Committee on Taxation, Congress’s non-partisan tax scorekeeper…The reconciliation bill, the outline of which was released Wednesday by Senate Majority Leader Chuck Schumer (D-NY) and Sen. Joe Manchin (D-WVA), proposes a 15% minimum corporate levy, or “book tax,” on certain companies. The provision is estimated to raise $313 billion, and JCT finds that manufacturers would be responsible for paying nearly half of it. The impact would be swift and devastating to manufacturers and the economy as a whole, said NAM Chief Economist Chad Moutray, who conducted his own analysis of the bill’s effects on the manufacturing sector. Including direct, indirect and induced effects, in 2023 alone the impact would include: A real GDP reduction of $68.45 billion, [and] 218,108 fewer workers in the overall economy….

The nonpartisan Tax Foundation also found that this new tax (yes, it’s a new tax, despite Manchin’s astounding spin) would reduce jobs and reduce economic growth. This would be an undesirable policy outcome under any circumstances. It’s devastating during a period of recession (with the very real possibility of a looming, second recession caused by the anti-inflation clampdown):

Democrats are pushing a 15 percent corporate alternative minimum tax on the financial statement income of American businesses reporting $1 billion in profits for the past 3 years…While Democrats claim they are only targeting large, profitable corporations, the cost of these tax increases will be borne by working families in the form of higher prices, fewer jobs, and lower wages. A Tax Foundation report from last December found a 15 percent book tax would reduce GDP by 0.1 percent and kill 27,000 jobs. Tax Foundation also warned that current supply chain issues could be worsened by the book tax’s disproportionate burden on key industries. he report concluded that “the coal industry faces the heaviest burden of the book minimum tax, facing a net tax hike of 7.2 percent of its pretax book income, followed by automobile and truck manufacturing, which faces a 5.1 percent tax hike.”

Many progressives may view a substantial tax hike on the coal industry as a feature, not a bug, of this proposal. But it’s a rather interesting result for a Senator from West Virginia to engineer and endorse.  Regardless, none of this looks like a recipe for “bringing manufacturing jobs back to America.”  I’ve spoken with some top GOP sources who believe the DC bubble excitement over the potential passage of this bill misreads the moment.  They tell me they’re eager to run ads hammering Democrats over deeply unpopular elements of the legislation in key states and districts heading into the fall.  Americans for Prosperity offers a preview of some of the turn-key messaging in a new ad:

Here’s another area that could be ripe for exploitation (especially since Manchin has denounced such schemes in the very recent past:

Could Manchin possibly imagine being double-crossed?  Being told one thing, in order to get something passed, only to discover that an unhappy surprise awaits him?  It shouldn’t be terribly difficult for him to envision such a scenario.