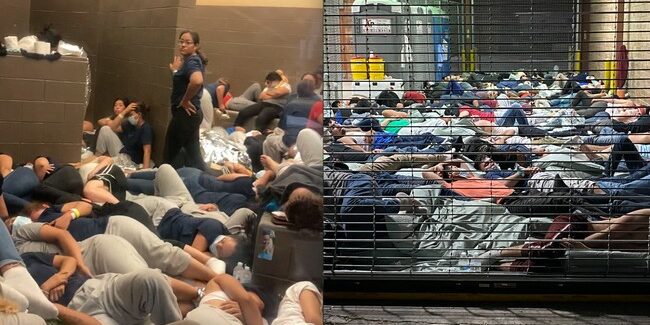 Illegal aliens are being bused into blue cities by the thousands, and Democratic mayors are unhappy about that. Welcome to the party. Border states and communities have dealt with the lawlessness and drain on their resources for decades.

When you become sanctuary cities and safe havens for illegal aliens, you also become dumping grounds for the heinous human trafficking trade. You might as well have a sign outside DC that says “dump your product here” for traffickers. In a wealthy DC suburb, that’s precisely what these people did. Police found scores of illegal aliens in so-called stash houses (via The Blaze):

Dozens of illegal immigrants trafficked into the U.S. were discovered in a rich neighborhood in Washington, D.C., on Wednesday, authorities said.

Documents from ICE reportedly detailed how the agency’s Homeland Security Investigations team raided six residential homes in the upscale D.C. neighborhood, where agents found 60 adults and 13 children, as well as $95,000 and a small amount of cocaine.

The stash houses were found in one of the richest areas of D.C., where the median home price is $750,000, NBC reported. The documents reviewed by the outlet did not disclose the addresses of these houses or how many migrants were being held in a single house.

Violent drug cartels based south of the U.S.-Mexico border make billions of dollars each year smuggling people into the United States. Migrants will often pay for the services of a “coyote” to cross the border illegally — earning the cartels an estimated $13 billion annually, according to the New York Times.

After reaching the U.S., migrants are often kept in “stash houses,” often in cramped conditions with limited access to running water or air conditioning. They are told they cannot leave without the permission of the smugglers. Typically, these stash houses are found in border states, it was unclear why so many migrants were being held in D.C., NBC News reported.

This illegal alien explosion is your problem, Democrats. Get the border under control and allow law enforcement agencies to deport people who shouldn’t be here. It’s that simple. Finish the border wall, increase the size of the Border Patrol, and allow ICE to do its job. The open borders experiment is cruel and expensive for all involved. Yes, it has devolved into a humanitarian crisis, but we’ve known that for years. Democrats are finally getting a taste of this border disaster, and only a sociopath would think everything is fine after this story. Oh, and there are countless others, but the left doesn’t care.