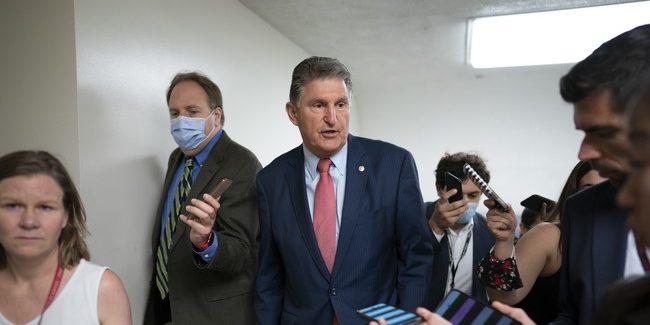 Democrats are in full panic. They’re entering the 2022 midterm season without any record of accomplishment. Nothing. Even the moderate Democrats tossed their lot in with Nancy Pelosi and the rest of the progressive caucus. It blew up in their faces. They now must defend a massive spending bill with far-left action items to their not-so-left-wing constituents back home. Is anyone shocked why we’re seeing so many House Democrats call it quits?

Sen. Joe Manchin (D-WV), with ice in his veins, killed Build Back Better. He did sincerely try to craft a bill he could support, but the far-left elements of the Democratic Party wanted to keep all the trash items. I don’t know why we’re hearing that the Biden White House scrambled to call him to try and talk him out of it. He’s been quite clear on what he’d support and what he wouldn’t. Manchin did reportedly send an aide to tell the Biden camp he was about to put a bullet into BBB.

The Democratic Party tantrum over this can best be summed up with two words: kill Manchin. At the same time, let’s also rehash the promise Biden gave to the progressive wing of his party regarding Manchin’s vote, which has deeper implications on legislation in the future. The bridge of trust has been torched—and it might never be rebuilt (via The Hill):

Finger-pointing consumed the Democratic party on Monday, one day after Sen. Joe Manchin (D-W.Va.) announced he would vote no on President Biden’s signature climate and social policy legislation, effectively derailing the president’s domestic agenda heading into a critical election year.

There’s no shortage of Democrats piling on Manchin, whose ongoing concerns about the bill hung up negotiations in the 50-50 Senate for months.

“I think what Sen. Manchin did yesterday represents such an egregious breach of the trust of the president,” Rep. Alexandria Ocasio-Cortez (D-N.Y.) said on MSNBC’s “Morning Joe.” “It’s an outcome we had warned about well over a month ago.”

Another leader of the Progressive Caucus, Rep. Veronica Escobar (D-Texas), accused Manchin of abandoning suffering Americans and undermining Biden and the United States on the world stage after the president addressed a Scotland climate gathering and vowed action.

“Build Back Better is about addressing the unprecedented challenges we are

Yefacing right now: a climate catastrophe, working families struggling to make ends meet, addressing inflation and giving everyday Americans a shot at prosperity. Walking away from BBB is essentially ignoring the crises in front of us that demand action,” Escobar told The Hill.

Biden promised progressives that if they cleared the way for the infrastructure bill, he would secure Manchin’s vote for Build Back Better. One Democratic lawmaker said Biden should never have overpromised to progressives, especially about backing big liberal priorities like paid family leave and expanded child tax credits that Manchin was privately rejecting.

This House Democrat also criticized Biden for never holding anyone on his team accountable after big political missteps, including the botched and deadly Afghanistan withdrawal and delays with rental assistance funding.

Wasn’t this Biden guy supposed to be a dealmaker? He’s been there since 1973. He couldn’t get a single vote. And what good is his word now? It’s just a disaster for Democrats all-around.  As for Manchin, his own party might hate him. No, they do. They’re bashing him. They’re ripping him. He couldn’t care less. That’s the benefit of hailing from West Virginia. He doesn’t have a gun to his head like the rest of his party does from the unhinged masses of the far left.